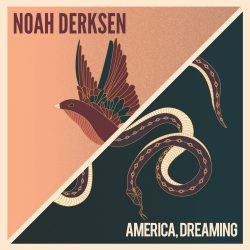 Noah Derksen has found the perfect mix of warm vocals and expert guitar playing to make a great autumnal release. ‘Dreaming, America’ focuses on the American born Canadian exploring the states. The list of things that are impressive on this album are endless. Derksen’s vocals are full of warmth and soul, paired well with his female vocalist throughout the album. The production values are something you would expect from the like of John Mayer, with the amazing backing band performance. The songwriting is incredibly personal yet still very relatable – even on songs like ‘Land of the Free’ which has a more gritty edge in production with the drums being the main focal point. Lyrically focussing on darker incidents in America, including Vietnam and Sandy Hook, Derksen mocks the belief that America is an indestructible country by closing the song with “land of the free/falling onto its, falling onto its knees”.

The vivid imagery Derksen is able to create with his lyrics and music is something that most musicians want to achieve, but few manage. In ‘Lonely in America’ the Canadian singer-songwriter has a juxtaposition with the music and lyrics as it’s about feeling lost: “if you’re looking for salvation, man, that ain’t free,” but it’s paired with quite an uplifting backing track. Also the female vocals that appear on the chorus really lifts the song to a new level.

Derksen has mastered the art of drawing in his audience, and as the nights are growing long and cold, this is the sort of record  you should be listening to as you sit by the fireplace. It’s an album that is hard to find fault with and one you’d love to hear in a live environment. Here’s hoping for some UK dates in the future.

Warm vocals makes this a must listen for autumn