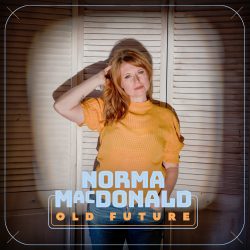 Drawing from late hours as an emergency room nurse, Norma MacDonald discharges her fifth release, ‘Old Future’, seeing to what MacDonald lightly describes as “death by nostalgia”. It is true, that the album nods towards a by-gone era, but there are also plenty of songs that would sit just as well amongst a Michaela Anne record. After several years of songwriting practice, Macdonald has become a great hand at writing pleasing turn arounds that couple both the hook line and cadences beautifully.

Having a mother of my own as a nurse, you can feel that resemblance of dark humour and a flat line approach to heavier topics which unearths itself in songs like ‘Slow Down Marie’, backed by the chiming guitars it further exemplifies that use of nostalgia. So does to the sound of ‘Wonder In The Sun’, nodding towards 1970’s California, but you would have to be a bit of a monster not to love that reverberated, liberated guitar sound.

Co-producer Dale Murray (The Guthries, Cuff the Duke, Hayden) plays an important part in this album, adding in his signature steel licks amongst a whole host of competent musicians bringing anything from the intimate strings in ‘One Man Band’ to the driving bass line that compliments ‘Temperamental Year’. A personal favourite of joint musical efforts comes from ‘I Already Have A Shadow’ which hosts some familiarities of indie/electro bands this side of the Atlantic with its use of arpeggiated guitar, rhythmical overdubs and locked-in rhythm section.

Overall, this was an enjoyable listen and one of Macdonald’s best yet that is sure to please Alt-Country fans. It was released 24th of April on Noyes Records as a digital/CD/vinyl and you can be sure to catch it on all major platforms.