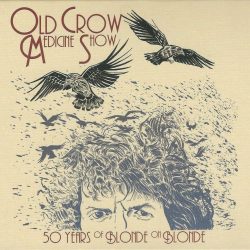 This was always going to be a major undertaking anyway you dice it. Old Crow Medicine Show, all fiddles and banjos, decided to perform Dylan’s iconic “Blonde on Blonde” album in its entirety to mark its 50th anniversary. The members of this band weren’t even born when the original album was recorded! But they’re on record as being huge Dylan fans and that fandom rings through this album loud and clear. First off, it’s worth taking a moment to remember just what an important record Dylan’s Blonde on Blonde is. It’s credited with being the first ever double album in rock music. It’s also reckoned to be at the very root of country rock – the first time rock musicians had gone to Nashville with the intention of working with session country players to produce a distinctive sound. It was a major influence on the Byrds, Gram Parsons, the Eagles and many more. It is one of the great albums of the modern age and is still recognised as one of Dylan’s own personal best. You don’t mess with a legacy like that!

Ketch Secor of OCMS makes no bones about his intense admiration for Dylan and it seems appropriate that this band, with their mix of modern and old time musical sensibilities , should be the ones to re-visit this collection of great songs fifty years on. So, how do the two albums compare?

Well – the reality is that they’re chalk and cheese. The original is a studio crafted album involving some of the finest musicians of the time while the new cover is an all live affair played by a single, integrated unit who have been on the road together for many years. In both cases the musicianship is outstanding but the feel is very different. By all accounts Dylan knew he was creating something special. I hadn’t listened to the original album in some years but, having heard the OCMS album I immediately went and dug out the original and it really is superb. Driven by Al Kooper’s amazing keyboard work and Robbie Robertson’s guitar it’s an album that really has stood the test of time and sounds every bit as good and as relevant today as it did then. We could compare every track and break down all the similarities and differences but that would serve very little purpose given the very different nature of these albums.

What we have in the Old Crow Medicine Show album is a very reverential homage to the original album. In general, the OCMS version of everything is that little bit more upbeat, a little faster in the playing. They’re coming at these songs as a live band playing in the now – they want to grab their audience and drag them straight into the mood of the event. They play these songs in exactly the same order as they appeared on the original album so they don’t have time to build a mood – they have to grab the audience by the neck and drag them along with them and they do it with exuberance and verve. From the opening Rainy Day Women #12 & 35 they’re off and running and you’d better keep up!

They’ve taken few liberties with the songs, most of them being delivered with slight variation on their original arrangements, the one big exception probably being second track Pledging my time, on Dylan’s original a very bluesy track. The blue bit is still there but this time it’s bluegrass – and it’s a great interpretation of one of the original album’s more ordinary tracks.

The stand out tracks on the original album are still the stand out tracks here – I Want You replaces Kooper’s soulful organ and piano with some beautiful Dobro guitar work from Chance McCoy but the urgent entreatment remains. Just Like A Woman is still one of Dylan’s best laconic love songs but OCMS have found the country heart inside the song and you start to see just how much country music is in some of Dylan’s earlier writing. Visions of Johanna boasts some beautiful harmony vocals; in short, every track has been treated with love and respect. This isn’t a straight covers album but the variations must surely meet with Dylan’s approval given the obvious appreciation that has gone into them. The album ends, of course, with an epic nine and a half minute version of Sad Eyed Lady of the Lowlands, another outstanding track on both albums .

“50 Years of Blonde on Blonde” may well be the ultimate tribute album, made by fans for fans and it is pretty much impossible to fault. Of course, it’s not an original piece of work (though there’s plenty of originality in there) but this may well bring OCMS to the attention of a much wider audience – though I doubt that will bother them one way or another. This was obviously a performance they felt they wanted to give to mark the anniversary of an album that was important to them; that the recorded results are so outstanding is probably a secondary consideration. This really is a great interpretation of a great album and you would do well to check it out….and then go back and re-visit the original as well. They really don’t make them like that anymore.