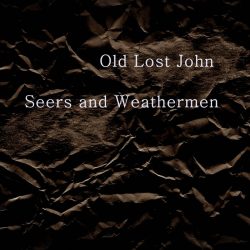 Old Lost John’s albums have regularly gained favour on this site. His latest offering is not about to change that, in fact, it is arguably his best yet. If the name is new to you, then you’ve been missing out. Swedish troubadour, Tomas Thurnberg, AKA Old Lost John, recorded ‘Seers and Weathermen’ during the latter months of last year, in his flat in Malmo and at his parents’ house in the Swedish countryside. He also produced, mixed and mastered it himself. Thurnberg has decided to release it only via download and streaming “to save a little CO2”. Whilst this might be very laudable, his judgement might be questioned from a commercial point of view. However, that debate is for another day.

Old Lost John’s sparse, acoustic sound is founded on guitar and voice, subtlety supported by a sprinkling of mandolin, harmonica, melodeon and whistles. This minimal instrumentation, coupled with his lived in, weary and at times strained voice, blend together to produce subtle flavours, much greater than the sum of their basic ingredients. Add in some stark, dark and occasionally grim, introspective songs and we are dining on something very special.

From the opening track, ‘Fine Like This’, each song engages the listener in subtly differing ways. ‘Sycamore Tree’ is eerily haunting whilst ‘Rainmaker’ has a more bluesy feel. The apocalyptic ‘Made of Mud’ is the longest, and strongest, song in the set at just four and a half minutes. Most songs are only three to four minutes long. This brevity gives them a well-focused leanness with no need for padding. Their economy leaves not a word, nor a note wasted.

In the world of Americana, there are those that are suspicious, or even dismissive, of artists from outside the American continent. In truth, there are plenty of examples that could be cited in support of that assessment. However, it is a myopic view. Old Lost John is one of the best examples of how such short-sightedness can restrict access to genuinely authentic and engaging artists. ‘Seers and Weathermen’ presents a very strong case for the view that Americana is as much a style and an attitude, as it is a geographical reference. The album is not an easy or a comfortable listen. It has a roughness, tension and edge that set it apart from the sanitised and homogeneous sound of many artists that are placed under the Americana banner. Those qualities will make ‘Seers and Weathermen’ instantly appeal to fans of Greg Brown, Malcolm Holcombe or Tom Ovans.