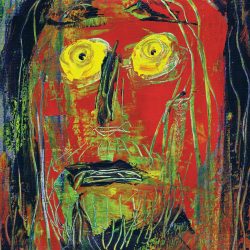 Paul J Bolger says of his new self titled album: “After a lifetime spent shifting between music, visual art and film I am doing what I want to do at an age some might say I should know better.” This is his first album in 25 years after spending much of that time working in animation and film.  The eight songs on this album are the product of two years work with Canadian singer-songwriter Hugh Christopher Brown producing. Bolger describes his style as “Bog Gothic”, a term apparently coined by Irish rock band Horslips. The internet is silent on their use of the name, but it is hard to find the influence of the seventies rock with Celtic tinges of Horslips that he is looking to associate himself with.

This is an album that pulls on all sorts of Americana threads. It sounds as if Brown and Bolger have tried to steep themselves in the genre and then reproduce the perfect Americana album. ‘Swim’ starts the album strongly enough with a Tom Petty style song that bounces along nicely. From there it all goes horribly wrong. The blame for this must be laid mostly at Brown’s feet. The female vocals supplementing Bolger on several pieces detract from the songs badly. Bolger’s voice is perfectly adequate and doesn’t need covering for. ‘Two Wrongs’ clearly intended to have a funky groove, is ruined by her “Aah, Aaah’s” that end up sounding out of time rather then being just behind the beat to propel the song. This piece highlights another deficiency, the lead guitarist. They simply aren’t up to the job, botching the solo badly. On ‘All Those Things’ the song just sort of peters out rather than ending after drifting along aimlessly on its steel guitar refrain.

When the songs are allowed to breathe rather than getting buried under layers of production there is cause for optimism. ‘Pillarstone’ starts on a ZZ Top riff and sticks with it, only wobbling on the guitar solo once again. It’s not Billy Gibbons. Closer ‘I Believe’ is mostly acoustic and easily the best thing on the album. If the whole record had been done with this sparser instrumentation the quality of Bolger’s voice and writing would have perhaps revealed themselves. Bolger tells us that he has been working on two albums at once. Perhaps giving his time to just one would have yielded better results.

An inconsistent album that would have benefited from stronger production