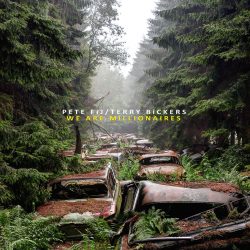 Second album from ex-Creation artists who flirted with success in the late 80s and early 90s with Adorable (Fij), House of Love and Levitation (Bickers) and who, through the education of life and its attendant struggles and joys, re-routed their indie rock past and delivered 2014’s well received debut “Broken Heart Surgery”. Widely praised, it drew comparisons with Simon & Garfunkel, The Velvet Underground and Johnny Cash and like on their 2014 debut, here are more deceptively simple, direct, beautifully constructed and timeless odes to love and dreams, lost and still bubbling and refined it with an English approach to song writing that takes the influences of Roy Orbison, Scott Walker’s less cheesy 60s output and Richard Hawley.

And it’s Hawley that’s worn on their t-shirts, but it’s not to their detriment; its just an unavoidable comparison. Like Hawley, these songs call to mind late nights in smoky bars on the wrong side of the tracks, where romantic men and women go with their broken hearts to wallow in, and share their melancholy with, other romantically melancholic men and women. It’s a beautiful and beautifully bruised. “I Love You” would make even the most Northern stoic well up. The coming around of “Waking Up” and the almost joyful resignation of the title track are not the highlights here as there’s no filler. Just two blokes who sound comfortable with each other making music that is reassuringly sad, but soothingly optimistic.