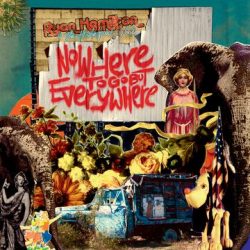 The title of this album and now a readily used quotation is taken from Jack Kerouac’s novel ‘On the Road’:  “There was nowhere to go but everywhere, so just keep on rolling under the stars.”  In the wake of a divorce, Hamilton took a US road trip, of which Kerouac made many, and has used his experiences to inform this collection of songs. The songs themselves tell of heartache, longing and the requisite amount of soul-searching that might be expected under the circumstances. Don’t expect rawness and fragility in these pieces however, they are mostly slickly produced and have a radio-friendly feel to them.

We are greeted by the opening track, ‘Only a Dream’ that urges us not to waste the opportunities set before us, featuring Hamilton’s undoubtedly talented vocals and smooth strings in the background. It is upbeat and cheery with a sheen of layered production. ‘Oh no’ is a litany of classic album titles from the likes of Springsteen, Oasis, Dylan, Bowie and Harrison, amongst others and maybe recalling some classics that you might have forgotten. The upbeat pop format continues with ‘Jesus & John Lennon’ where the lines, “Some things aren’t meant to work, when the breakup comes it hurts” hints that external analogies maybe being drawn with internal turmoil. ‘Out of My League’ deals in a feeling that whilst you are crazy about someone, you may not feel that you are good enough for them. The next track appositely entitled, ‘Let’s go Slow’ slows the hitherto poppy upbeat tempo down to a more considered pace. ‘Can I Get an Amen?’ has a rocky Guns n’ Roses feel whilst towards the end, the final tracks adopt a less produced feel to give us a creditable cover of Tom Petty’s ‘Southern Accents’  and some heartfelt numbers such as ‘We Gave it Hell’ and ‘Pick Yourself Up’.

Hamilton’s album gives us a variety of moods and tempos with a variety of production that ranges from a slick to a more pared-down approach; his vocals demonstrate that they are happy with either approach. Enjoy the journey.