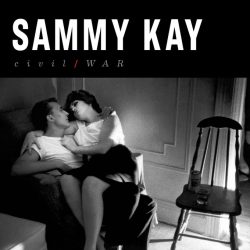 Sammy Kay has picked a stonking opening track for his new album ‘civil/War’. Straight from the off the gravelly-voiced New Jersey singer-songwriter grabs your attention with the superb ‘Silver Dollar’ and quickly backs it up with the excellent ‘Forgotten Ones’. ‘civil/WAR’ is an album where Kay seems to rediscover himself having been seemingly disillusioned with touring and the music business.

“I came home from a tour, and I was just done. I didn’t want to do this anymore. It was November 2017. Everybody’s got mental health issues. I thought the road was really the issue, but it turned out that it was everything else.  When I got home from this tour, I said, we’re going to leave this be and maybe, if something changes in the future, we’ll revisit it.”

It didn’t take long for something to change and for the inspiration and creative juices to return and ‘civil/War’ is littered with a variety of world-weary and downtrodden characters all suffering from some form of the worst aspects of the human condition, with alcoholism, heartache, death, mental illness and even suicide taking centre stage.

‘See You Soon’ is a classic example. It’s a song about a friend who took their own life in dreadfully grim circumstances and you can feel the agony in Kay’s voice as he sings “just tell me why you left that night”. Suicide, especially when it happens close to home, as in this case, leaves friends and loved ones wondering why they didn’t see the signs and how they could have intervened. ‘See You Soon’ is in its way a love song and Kay manages to distil a complex melange of emotions into 4 minutes of immensely moving music.

Although this isn’t a politically motivated album, Kay does manage to sneak in some social commentary with the aptly named ‘Thoughts and Prayers’ where he lets loose with a fierce written attack on the almost never-ending gun violence that seems endemic in the US at  the moment and with Kay a staunch advocate of gun law reform its no surprise to find this included on the album.

You may think from the previous couple of paragraphs that ‘civil/WAR’ makes for a depressing listen but that’s far from the case. It doesn’t make the mistake of allowing the characters to wallow in self-pity and ultimately, it’s strangely uplifting. Maybe that’s not surprising given that Kay himself had previously managed to rise from the ashes of previous self-destruction and he should be rightly proud of his fourth album as ‘civil/WAR’ is probably his best offering yet.