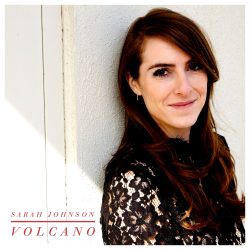 Sarah Johnson wrote her first song when she was two and now three decades later, she’s released her first record, a six-song EP called ‘Volcano’.  Based in Dallas, Johnson has written six songs that are very personal and as she says, “Everything is so autobiographical and based off real moments, relationships, and real-life experience.”. The most interesting song is the opener ‘Red Bandana’ in which the opening line is “Hey little lady what’s your name, I’m a rodeo man looking for fame but tonight I’m looking at you” but then the point of view of the song changes and we hear from the girl (Johnson?) as she sings “Now I’m back in Texas….thinking of the rodeo man who slept me away” – an interesting and unique way to tell the story.

Unfortunately, the other five tracks are fairly run of the mill love songs which never really catch fire despite having titles such as ‘Fire’ and ‘Volcano’. The tempo doesn’t vary much and there aren’t any out and out rockers or love-torn ballads to grab the listener. Beau Bedford’s production at Modern Electric Sound Recorders in Dallas has a real ‘It could only have been recorded in Texas’ feel to it. The instruments are crisp and clear but for some reason Johnson’s voice is double-tracked throughout most of the album. This is a great shame as it is superb and in the few instances where it isn’t double-tracked, it really sparkles with Texan brio; it’s a voice she and Bedford should let shine rather than burying it in reverb and effects. To quote Bedford:  “…add in her smooth, forever easy-to-listen-to vocal performance” – it would have been nice to have let that easy-to-listen to voice, breath a little.

‘Volcano’ is a good introduction to Sarah Johnson’s music – let’s hope we hear more from her in the future – maybe without the double-tracking.