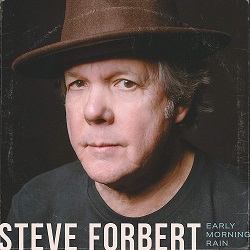 In more than forty years of recording Steve Forbert has released a phenomenal number of truly fine albums, appearing at first with a brash new take on folk-rock on ‘Alive on Arrival‘ and ‘Jackrabbit Slim‘, and evolving over the years into a more country-influenced style of storytelling. He’s produced a tribute album to Jimmie Rodgers and this – a few album tracks like ‘When You Walk in the Room‘ and the live ‘Starstruck‘ aside – is the extent of his excursion into the world of other people’s songs. Until now.

‘Early Morning Rain‘ sees the perennial troubadour scoop up one shy of a dozen of his favourite songs and give them a new outing. Some are well known – the title track for example – and others were slipping from the collective consciousness.

Steve Forbert is clearly a fan of great song writing – and there are examples of the work of the likes of Leonard Cohen, Ian Tyson, Richard Thompson. Some songs, such as the fine ‘Box of Rain‘, are straight readings, replacing Forbert’s distinctive vocal for Phil Lesh’s.  On others there’s a significant reworking. perhaps the best example of that is how Ray Davies’ ‘Supersonic Rocketship‘ from the Kinks’ album ‘Everybody’s In Show-Biz‘ has morphed from music-hall novelty into a rocking little number, which sounds like a definite single. It’s so redolent with that early Forbert sound that first pulled us all in that it could have fallen off ‘Little Stevie Orbit‘. That this is followed by the tragic waltz of ‘Withered and Died‘ shows the breadth of Forbert’s ability to inhabit a song as he takes Richard Thompson’s composition from English folk to American pedal steel drenched country-folk. It’s emotionally sung with “I’ve only sad stories to tell to this town – my dreams have withered and died” hitting home.

‘Pick Me up on Your Way Down‘ has a honky-tonking looseness to it, whilst ‘Good Time Charlie’s Got The Blues‘ has that Forbert melancholy to it, it’s such a perfect fit that it makes it clear that Danny O’Keefe must have been quite an influence on Forbert’s own writing. The album closes out with another song that sounds very, well, Forbert-ish. It’s a complicated choice – Steve Forbert was one of several people who had the “New Dylan” tag hung like an albatross around their neck, but a collection of great folk-influenced singer-songwriters could hardly ignore Dylan. The choice of song is one of Dylan’s relatively obscure numbers – never released on a studio album ‘Dignity‘ none the less is an appropriate sign-off. Yes, it’s a hat tip but it’s also a reminder that there really was a reason why Steve Forbert attracted those “young Dylan” comparisons. ‘Early Morning Rain’ is more than a stopgap or nostalgia trip – it’s an excellent album in its own right, and unlike all those “great American songbook” albums that flood the market it draws from a well of excellence that deserves to be tapped again.

The sound of Steve Forbert having fun