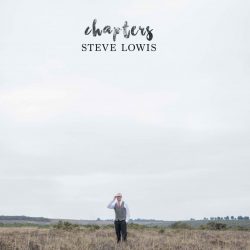 Albums capture your imagination in different ways. Some grab you by the throat and demand that you listen, some come with a reputation to live up to, some come with expectation and curiosity; every so often one comes along and quietly makes its presence felt and that’s the case with “Chapters”, a new offering from singer/songwriter Steve Lowis. Listening to this collection of well-crafted songs you may not be immediately grabbed but you slowly come to realise that this really is a very good album, well put together and well interpreted by the musicians involved.

Steve Lowis is a Yorkshireman who made the journey South some years ago and is now resident in Southampton, where he’s been a very active part of the local music scene for the last 16 years. This album is a real labour of love, pulling together some of Lowis’ personal favourites from his own songs and recording them with musicians he’s come to know and respect over the years; and it’s the quality of those musical relationships that really shine through. Of particular note is Lowis’ connection with violinist Elina Zotova, who provides some outstanding fiddle playing throughout the album, but all the musicians are worthy of a name check – Natasha Gibson, who’s piano playing, particularly on the track ‘Broken’, is beautifully sympathetic to the song, the backing vocals from Catherine Mclean provide some fine harmonies most notably on album opener ‘Rescue’ and the rhythm section of Luke Garnes (drums) and Dan Culling (Bass) provide a tight platform for all the songs to work from. There’s also the Slide Guitar of Jack Dale and general guitar duties from Producer Tom Gibson, who does a great job of pulling this all together and helping Steve Lowis achieve his vision for these songs.

Lowis has cited his influences as Neil Young, Ryan Adams and Iron and Wine and you can certainly hear their presence in some of the songs on this recording but there’s also a certain “Englishness” that reminded this reviewer of early Ralph McTell; the narrative quality of Steve Lowis’ songs is particularly strong.

Stand out tracks are the two already mentioned along with the title track, ‘Chapters’ – a “life is what happens while you’re busy making plans” sort of song – and the clearly autobiographical ‘Halfway Down The Road’, with its great ringing guitar sound. Lowis’ voice has a real lived-in quality that really suits his material.

If there’s a criticism it’s that the strummed guitar and violin combination that dominates the arrangements can get a bit samey and some of the songs might benefit from a sparser approach – Broken, for instance, might work well with a piano only backing – but this is nit-picking; this is a strong album from an accomplished writer and is well worthy of your attention and your cash.