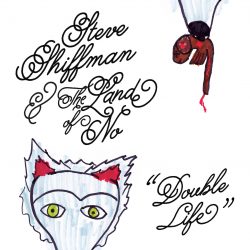 One thing you can immediately say about Steve Shiffman & The Land of No is that this is a band that really likes to mix things up! Fronted by Canadian Shiffman the band hails from New York and also includes guitarists Dave Hollinghurst and Alec Ferrell, Kent Heine on bass, and drummer Dan Mintzer. ‘Double Life’ is their first full length album recording and it’s one that makes you sit up and take notice right from the start. Sitting somewhere between Indie & Art rock the band’s sound is one of jangly guitars and strident drums; at times dissonant and sometimes even discordant, it’s an album that challenges and fascinates almost in equal measure.

‘Double Life’ is an extremely appropriate title for this album because it sounds almost like a conflict of two musical philosophies that seem to come together as a conceptual whole. There’s a sense of anarchy and chaos about the album and yet, somehow, you’re drawn into it. The more you listen, the more tracks that sounded odd and more than a bit wrong start to take on texture and form. Perhaps the track that best sums up the album is the second track in, ‘We’re A Mess’, based on a heavily distorted guitar sound and lines like “Strung out in a Hotel room on stuff. That’s a lie but at least that’s what it feels like” it perfectly sums up the mood of the album and the music of this band.

Other stand out tracks on the album include ‘Mojo Back’, an instrumental track that had this reviewer thinking of ‘Astronomy Domine’ era Pink Floyd, ‘Sunspot on my Mind’, with its Byrds like guitars and upfront drum track, ‘From a Perch, in Red’ with its almost trance-like chorus “All you have to do is push. Don’t be so critical, the effects can be quite lyrical” driven by drums and percussion but with brilliant trumpet interventions, and the excellent title track that is melodic and infused with a small string section that, given everything that’s gone before, you’re really not expecting.

The album isn’t without its faults. It has been produced by the band themselves and would have benefitted from a more independent hand on the faders. Some of the tracks have distinctly odd mixes and, while this may well be part of the chaotic vision, it doesn’t always do the individual tracks a service. The vocals are often muddied and buried in the mix. Again, this sometimes works in their favour because, vocally, they’re not the strongest act out there – but it’s hard to determine lyrics and in some songs it would be an advantage to hear more of the lyrical content.

There are other indulgences that detract from the album and which an independent producer might have controlled; ‘Can’t Look You in The Eye’ is a good track but, at just under seven minutes, is way too long for the ideas contained within it, especially as the second half of it is just distorted guitar riffs getting louder and more distorted until it becomes little more than white noise. The idea isn’t a bad one in the context of the song but not for some three minutes of the track. And then there’s penultimate track ‘Half In The Bag’ – essentially twenty-seven seconds of pointless filler. It’s an instrumental track but without any interesting ideas contained within it – it really serves no useful purpose whatsoever and is a waste of the time it would’ve taken to record. You get almost to the end of an interesting, if flawed, album and one of the main thoughts you come away with is – why was that pointless little track on there?

Hopefully this band will bring in an external producer for their next recording – someone who can help them get their vision across with a bit more focus. In the meantime this remains a quite fascinating album for the more adventurous listener. It’ll be interesting to see where Steve Shiffman & The Land of No go from here.

Challenging ideas that would benefit from an independent Producer.