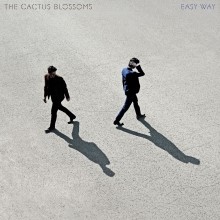 Would you ever get sick of being compared to the Everly Brothers? Praise doesn’t get much higher when we’re talking about tight, sweet harmonies and the kind of blending of sound only possible when siblings sing together. This is something that The Cactus Blossoms, half-brothers Page Burkum and Jack Torrey, know very well. Their debut album, 2016’s ‘You’re Dreaming’, was packed full of Everly-style, country music, a sweet trip down memory lane. So, what does new release ‘Easy Way’ bring to our ears?

Album-opener ‘Desperado’ sounds like it’s straight from the 50s: a steady, plodding vintage track, something that’d be at home playing in an old school American diner.

From there, ‘I’m Calling You’ has a beat that reminds you of Roy Orbison’s ‘Pretty Woman’, but slowed way down. As a song it’s a bit lacklustre, even though it feels quite dark in topic: imagine being that person calling an ex all night between 2am-7am with no answer. The song just trails off and cuts to fade – quite dissatisfying – maybe that was the intent as the protaganist gets nowhere either?

Title track ‘Easy Way’ really showcases the Phil-Everly-style soaring harmonies: it’s fascinating how similar The Cactus Blossoms can sound to these brothers from another era. This track has a laid back vibe to it and the lyrical repetition of “Love’s an easy way, what else can I say?” adds to its soothing nature. ‘Boomerang’ is another trippy, relaxed number, it feels reminiscent of The Beatles, with vocal delivery very similar to John Lennon.

There are a few instances in the album where songs feel clearer and more powerful. ‘Please Don’t Call Me Crazy’ for instance feels like it tries a bit harder: the vocals have much more of the aforementioned Orbison about them. Overall a rockier sound that lifts the album out of its comfort zone – though probably not far enough. ‘Downtown’ is also much stronger lyrically “Try getting by on minimum wage, I dare you. American slaves in the modern age, it should scare you”.  Accompanied by a stronger sound reminiscent of the Dave Clark Five or The Byrds. It’s got a bit more pep to it.

These punchier tracks are often lost amongst the soothing 60s harmonies and laid back folk-pop. Ultimately, this is probably why this album isn’t as strong as it should be.

It’s a shame as all the component parts are there: stunning harmonies, tight musical performances and some fantastic songs. Let’s not forget all the comparisons with iconic 50s and 60s artists. Regrettably though, ‘Easy Way’ feels a little out of kilter and perhaps presents too many sweet retro ballads for a 10-track album to cope with.

If you like folk-pop with a hint of Everly, this could be the album for you