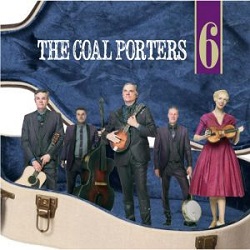 On their latest studio album Sid Griffin’s alt-bluegrass rootsy Americana combo continue to do what they do best – proper bluegrass, there ain’t no drums in this here band boy, with a twist. No.6 finds the band in a reflective and slightly nostalgic mood with several songs that are like extended and expanded anecdotes which may, or may not, be completely true but certainly have elements of some kind of truth in them. The day the last Ramone died is a tribute to the passing of Tommy, with Sid capturing the joy of seeing The Ramones back in their, and his, flush of youth ” Gabba gabba hey 1,2,3,4 they did say / DeeDee, Johnny & Joey / Are taking our blues away”. It’s actually shocking that a band so full of vibrancy has fallen by the wayside so completely it’s enough to make anyone want to “put on my old leather jacket / The day the last Ramone died”. There’s more nostalgia – this time for drinking days and an old bar tended by a blind man – in The Blind Bartender; it’s a long guitar driven tale of friendship, support and wild times – and the speed with which people important to you can disappear from even local memory. An edge of melancholy is added through Kerenza Peacock’s perfectly pitched fiddle.

The Coal Porters though are a songwriting democracy – guitarist Neil Herd contributes a mighty trio of songs. That old style prison break is a jaunty celebration of cinema – and of heading out on the lam when emotional needs get too much and life’s more complicated than a neatly sown up movie – whilst Unhappy Anywhere is a more weary take on a breakup. Capturing both regrets at words foolishly spoken on a drunken evening and the golden truth that you can never outrun your misery “the lights of old Aberdeen won’t show this moth a flame / The seas of California can’t wash away this pain”.  It’s a great song on an album of, mostly, great songs. Only Kerenza Peacock’s Play a tune – which is sung with the formality of a 1940’s BBC live broadcast – seems a little out of place here, although it again demonstrates the breadth of talent in The Coal Porters.  A final last surprise is the closer which can be seen as another nostalgic nod – a reshaping of The Only Ones‘ Another Girl, Another Planet making it into a tender love song that perfectly fits into the alt-bluegrass canon of The Coal Porters.

Once again The Coal Porters ride into town, doing what they do best – righting wrongs by writing songs.