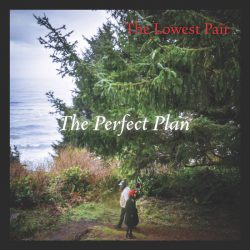 Lovers of Americana trivia may take delight in the link between The Lowest Pair and Glen Campbell. It is the fact that ‘The Lowest Pair’ is a poem written by country and bluegrass artist John Hartford who also wrote the Glen Campbell hit, ‘Gentle on my Mind’. Consummate banjo players, the duo of Kendl Winter and Palmer T. Lee have five albums under their respective belts including what has to be a contender for the best covers album title of all time: ‘I Reckon I’m Fixin’ On Kickin’ Round to Pick A Little, Vol. 1’. Having toured from Bellingham, Washington State to The Shetland Islands, the duo are no strangers to the live circuit which has no doubt honed their musical skills to the level shown on this album.

The, ‘Perfect Plan’ whilst having claw-hammer banjo and acoustic guitar at its heart, is augmented by a variety of session players who bring a lush sound to some of the tracks. There is much reflection in the songs on seeking to reconcile actuality with idealism and not a small amount of hope is contained within these ruminations.

Winter, who takes lead vocals on the majority of tracks, has a very distinctive voice, in turns reminiscent of Emmylou Harris and Mandolin Orange singer, Emily Frantz. The opening track, ‘How Far I Would Go’ has a spacious feel that lingers like a wisp of smoke before it is succeeded by ‘Too Late Babe’, featuring aforementioned banjo with a steady backbeat. ‘Wild Animals’ urges us to, “Breathe in breathe out” through the vicissitudes of fortune, using Lee’s secondary vocals to good effect. ‘Shot Down the Sky’ has a classic country feel helped by some agreeable pedal steel whilst Lee takes lead vocals on ‘Enemy of Ease’ where memory can haunt you and prevent you from moving forward.

The complementary harmonies of Winter and Lee paired with their lyrical songwriting have been given the opportunity to flourish with the inclusion of a variety of instrumentalists on this album. At times earthy, at others dreamy and wistful, it is well worth spending some time with.