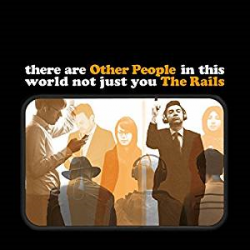 The Rails have delivered a contrasting follow up to their debut ‘Fair Warning,’ yet it is one that works like a dream. Husband and wife Kami Thompson, daughter of Richard and Linda Thompson, and James Walbourne, who has played with the likes of The Pretenders, Son Volt, Ray Davies, The Pernice Brothers and The Pogues, have deepened their sound from the folk-based debut that impressed many, yet maintained the integrity and experiential beauty of their debut.

‘Other People’ performs that tricky alchemy of turning the at times bleak aspect of the human experience into irresistible pop hooks and accessible melodies that will instantly engage the listener. Fully formed songs featuring close harmonies that underline the close relationship between Thompson and Walbourne are a hallmark of ‘Other People,’ perfectly exemplified by the ttitle track. The aching ‘Drowned in Blue’ is a moving duet on the subject of relationship difficulties.

The beat of London life pulses throughout the album, notably opening track, ‘The Cally,’ inspired by the memories of Walbourne’s grandfather and a track that puts you in mind of the Pogues classic ‘The Old Main Drag.’ ‘Leaving This Land’ and ‘Bricks and Mortar’ both focus on the realities of the gentrification and prohibitive costs of living in the capital while ‘Willow Tree’ is a folk-based dreamy classic.

‘Other People’ is a moving and engrossing follow up album and another major  step  in the career of these hugely talented partners.