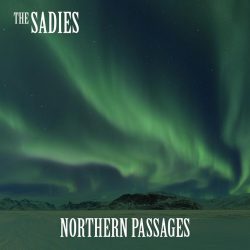 The Sadies are enjoying a fantastic run of form. Their last two records have both been brilliant autumnal works and this one begins in pretty much the same vein – the opening chords of Riverview Fog are a quite specific swirl of acoustic country psychedelia; it’s like they’ve captured the sound of light dappling the delicate fire of autumn leaves. It’s not far from the kind of sound that tyros like Ryley Walker have reached. Then again Another Season Again reaches back into their more raucous like past, the guitar sounding like a huge pick is strumming a chain link fence, the guitar solo like a string of barbed wire placed atop, while inside there’s a more tender heart with harmonies buried well down in the mix. Suddenly the trees are all bare and the light hurts your eyes. It’s a return to their spiky roots and something you might find in The Noise Museum but instead this is an instrumental that sifts through the surf, twang and jangle that they’ve been trading for the past couple of decades.

The centre of this record is the collaboration with this generation’s J Mascis, Kurt Vile. It’s Easy (Like Walking) like a lot of the other songs on the record is about the process of making music, with Vile’s easy languorous charm mixed with the sheer skill and sensitivity to collaborators that the Sadies have always shown. It’s a beautiful song, the guitars blended wonderfully; it really does sound easy. The Elements Song is one of a number that deals in religious imagery; Through Strange Eyes contains a startling image of musical notation made by birds resting on power lines, God Bless the Infidels returns to Country music with a capital C, then The Good Years is altogether different sonically – it’s a dense shimmer of traditional elements, the guitars, what sounds like pedal steel and harmonica but thickened into a smog of beautiful noise.

It’s a rich record with a troubling undercurrent, like there’s some sort of unconscious understanding that there’s something wicked this way coming (of course it’s already here). As usual with this run of records the sound is beautifully rich and full, the perfect backdrop for hard problems. Questions I’ve Never Asked is a manifestation of this along with the use of fallen angels as a recurring motif. The collaboration with Kurt Vile seems somehow like something that doesn’t fit with the rest of the record, a pretty distraction, but what a way to forget about problems.

The Sadies continue their recent run of form