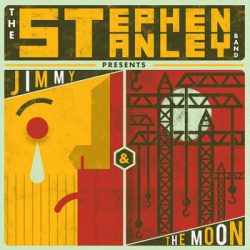 Most people wilfully misremember the 1980’s – they selectively associate the decade with musical excesses with 12” extended mixes of new romantic and electro-pop music. Parallel to this were a myriad of other things, one of them was College Rock and this record reminds me of those times (the college rock bit, not big hair and slap bass – now I’m doing it). There are few songs that I hear echoes of bands like Big Dipper: Stanley has been around for a long time (in the Lowest of the Low) so this is more like post-grad rock.

The songs are big and bold, unafraid, unashamed to flaunt their heritage: the title track is built from guitars with piano chattering away in the mix, the chug of rhythm guitar along with vocals that consciously build the song, Stanley’s voice being not a thing of beauty but a workman’s tool skilfully used to create just the right effect. ‘Under the Mynah Bird’ uses New Wave guitars folded into foursquare rock, a kind of cross between Springsteen and Robyn Hitchcock.

‘Melinda’ is a rush, flirting with power pop before consummating the hell out of it, a big chorus with ringing guitars, an irresistible blend, the type of song that makes you want to wind down your car windows even when it’s -5 outside. Then there’s scruffy duet ‘Next to Me’, with Hadley McCall Thackston – it’s charming and smart without being neat and precise. ‘California’ takes a bit longer to establish itself, waiting until almost three minutes to set the scene and burst not into vivid life but to a false dawn, holding onto the emotion that has been invested; waiting like you do at the end of a painful break-up to say the words that make it final, it takes a while, the guitars writhing as though pained, stepping away from the obvious path. Eschewing closure, the song bravely closes without climax or resolution.

This is the work of a veteran who still has things to say. He seems invigorated by the situation. Time for us all to go back to college.

Former Lowest of the Low on a high