Here’s our second article in the new Unsung Heroes of Americana series. This time out, Richard Phillips takes a look at a truly iconic instrument; one that has been at the heart of American roots music since it made its debut almost eight decades ago – the Gibson J45.

The Gibson J45 acoustic guitar can lay claim to having had a significant influence on the sound and feel of Americana music over the course of the past 70 years or so. By extension, in the hands of some of the most prominent Americana singer/songwriters of the 20th and 21st century, the J45 could also lay claim to influencing the way its audience thinks and feels. These might be considered bold statements about an instrument made of wood, metal and plastic but the J45, as so many of its owners will attest, is so much more than a sum of its parts.

Artists who have played and sung with the J45, also known as “The Workhorse” include: Woody Guthrie, Emmylou Harris, Bob Dylan, Willie Nelson, Bruce Springsteen, Russ Barenburg and Lucinda Williams, to name a few. Few people could have imagined that, when launched in 1942, the J45, so-called because it retailed at the average weekly wage of $45, would still be an instrument of choice for professional and amateur players alike in 2020. The trademark sunburst finish on the top of the guitar, though undoubtedly of aesthetic appeal, was in fact used to disguise the joins that were necessary due to wartime timber rationing. Wilco’s Jeff Tweedy would probably meet consent from the aforementioned artists when he says, “If there is one tool the singer-songwriter should have, it would be the J45”. The “Workhorse” sobriquet emanates from the fact that the guitar is incredibly reliable, being less susceptible to temperature variations which can cause a guitar’s playability and tuning to become destabilised, making it a popular choice for live and studio performance. The sound of the guitar has appealed to many artists, its mahogany back and sides lending warm earthy tones whilst the Sitka Spruce top provides clarity and definition to the sound. Bruce Springsteen is known for his energetic strumming which suits the J45 with its solid build and wide neck as demonstrated in this rendition of, ‘Long Time Comin”

Artists like Russ Barenbugh, meanwhile, can demonstrate its versatility with his finger-picking style:

Dylan must have taken Woody Guthrie’s lead by utilizing the J45 on his early albums; his first album sees him holding a J50 on the cover, which to all intents and purposes is a J45 without the sunburst finish: 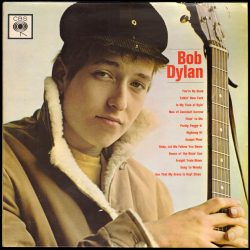 Those with eagle eyes will notice that the photo on this album cover has been flipped as the guitar strings are in the wrong order. This was done so that the headstock of the guitar didn’t obscure the Columbia Records logo! Dylan went on to use many varieties of guitar but his playing of the J45 saw a resurgence in the early nineties.

History has been and continues to be made by the trusty J45; a good contemporary example of its innate ability to form a means of expression for the singer-songwriter are these tracks recently recorded by Lucinda Williams from her home earlier this year:

2 thoughts on “The Unsung Heroes of Americana – Gibson J-45”