The Waterboys have announced the release of a new album ‘Where The Action Is’ which comes out in the UK on May 24th via Cooking Vinyl. Its title is apparently inspired by the chorus of Robert Parker’s 1960s mod / northern soul classic ‘Let’s Go Baby’, and the track’s update of the Parker classic – with lyrics to reflect lead singer Mike Scott’s own preoccupations – is described as “a cyclone of a song, all swirling Hammond, lead guitar solos played by Steve Wickham on his fuzzboxed-up fiddle, and female vocals provided by the band’s fabulous Jess and Zeenie.”

More visceral rock’n’roll follows on ‘London Mick’, a tribute to Clash guitarist, Mick Jones which is rendered in Jones’ own style circa 1977. A companion piece comes in the shape of ‘Ladbroke Grove Symphony’, a paean to the former Bohemian heart of West London. 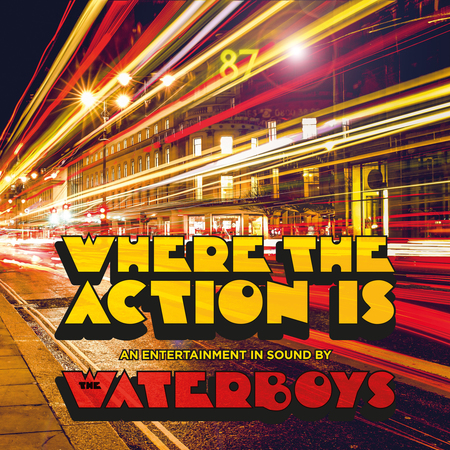 The first single from the album which you can hear below, ‘Right Side Of Heartbreak (Wrong Side Of Love)’, was recorded by Mike at home, guitar and vocal into a single microphone, then sent to Waterboys’ keyboard whizz Brother Paul who added the soundscape, beats and effects at his studio in Nashville. Further experimentation can be found on ‘And There Is Love’ (a collaboration with English producer Simon Dine ) and ‘Take Me There I Will Follow You‘, with its multi-rhyming lyrics over Brother Paul’s beats.

The Waterboys tour the UK in May and throughout the summer – dates are below, along with the album tracklisting.

‘Where The Action Is’ tracklist: