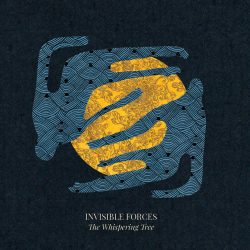 At just under thirty-one minutes ‘Invisible Forces’ is an example of big things coming in small packages. There is a lot of ground covered here. The Whispering Tree, led by multi-instrumentalists/ songwriters/producers Eleanor Kleiner and Elie Brangbour are many things to many people. In their ten years, two albums and two EPs they have secured a loyal following who, incidentally, funded the album, which was produced by Kleiner and Brangbour at their home studio in  Beacon, NY.

Brangbour comes from a French background and you can hear the small-town gypsy-jazz coming through strongly in the album’s first single, ‘Fat Cat’, in which Kleiner asks, with perhaps a hint of irony “How do you sleep, How do you sleep. In your tower on your satin sheets.” The irony question is a running theme which is best left to the listener to interpret. There’s no doubt it’s present, but to what degree is debatable bearing in mind the subtlety of the lyrical composition. The listener will no doubt also be distracted somewhat by the powerful presence of Kleiner’s vocal delivery.

The French/New Orleans influence is prominent. The dystopian surrealism of ‘Garden’, with its Gallic twist runs contrary to tracks like ‘These Houses’ and latest release ‘California’, which cover more familiar ground for americana fans, albeit in the most evocative of ways. Kleiner and Brangbour at their best have that knack of setting a scene that can swallow a moment in time for the listener. You’ll never get it back – but you’ll be in a good place while it’s gone!

The album notes make for particularly interesting reading. Each song, rather than espousing where, when and who the track was recorded by, lends a small description of what it means to them and how they identify with it. That’s a great idea for the listener, who might, for instance, hear ‘Split In Half’ as soulful sub-country with a hint of funk but refer to the notes to learn the band consider it as a blues-rocker that explores trauma and healing! Don’t worry – that wouldn’t make you ignorant. Just, like the rest of us, receptive to a subjective industry.

‘Invisible Forces’ is a musically diverse take on classic midwest americana sung with the soul of the gospel, reminiscent of Iris Dement lighting the fires of small-town escapist fantasies. Kleiner and Brangbour explore the vastness of America and the well-laid traps that can ensnare any unsuspecting young idealist, leaving them stranded in lives of what might’ve been. It’s nostalgic for missed opportunities and provokes feelings of yearning for old dreams that live deep in the subconscious. But that’s only half the story; as songs like ‘Fat Cat’ prove, there’s a myriad of influences at work in this half-hour of music. Relax too much and you’ll allow the homespun folk to take root while the undertones of contemporary socio-political commentary pass unheeded. Which would be a shame because this album needs to be approached with an open mind. Sweet music it may be, but there is also a message to be deciphered and The Whispering Tree deliver it with a grace which deserves recognition on larger platforms.