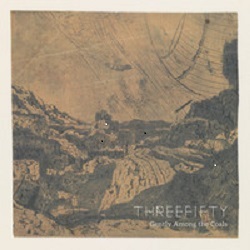 Threefifty founders Brett Parnell and Geremy Schulick have developed their love of, and influences from, guitar heroes such as Chet Atkins and Mark Knopfler through classical guitar training, and released three previous albums. And then they drop ‘Gently Among The Coals’ on us and leave it to us to figure it out. Now grown into an eight-piece, harnessing keyboards, mandolins and violin alongside the traditional guitar-bass-drum package, their sound has evolved into something almost indefinable but also, once heard, inescapable. From the subtly enveloping riffs of Crossing State Lines, through to the almost overpowering album closer of Freedmen, this album will certainly take you on an unpredictable, but hugely enjoyable journey. Rather than verse, chorus, verse, etc, ‘Gently Among The Coals’ contains a series of soundscapes that can almost drown you in ambience.

The vocals, dreamily delivered, sometimes low in the mix, by Joanie Leon-Guerrero Parnell are a key ingredient, although they don’t always behave as you may expect and often serve as another instrument. All lyrics are settings of poems by Vicki Kennelly Stock, which adds to the almost ethereal atmosphere of what is surely destined to become something of a classic by those fortunate enough to discover it.

Daedelus, electronica musician and producer, has added a synth-drum beat to More to broaden even further the styles and influences. However, the most striking track on the album is the majestic Running in a Burning House, which builds and swirls in true ‘Spaghetti Western’ style, complete with whistling and Nathan Koci on trumpet.

‘Gently Among The Coals’ is an album of real depth, and a definite must for anyone who likes their boundaries pushed in innovatory style.

Ethereal and genre-busting collection of soundscapes.