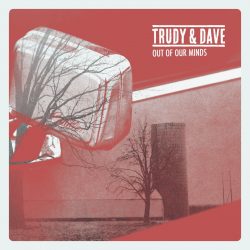 Trudy & Dave’s debut album ‘Out Of Our Minds’ isn’t accurately speaking Americana as the band hail from Norway but Norwayicana doesn’t really work as a category (and is impossible to say) so if you’re looking for the album in a record store (remember those halcyon days just a few short weeks ago?), it’ll probably be filed under Americana.

Trudy and Dave is the name of the band but the band doesn’t have a Trudy or a Dave in it – it’s Johanna Demker and Alf Bretteville-Jensen who are the two lead vocalists, wrote most of the songs on the album and play guitar. They’re superbly backed by Thomas Pettersen (drums), Magnus Berg (guitar), Bjørn Berge (slide guitar), Olav Torgeir Kopsland (guitar and mandolin), Bo Dundic Berg (bass) and Eivind Kløverød (percussion).

The album which was recorded in Fredrikstad and mastered in Los Angeles, consists of ten tracks that cover everything from hard rock to new country to plaintive ballads. There all the tropes that you associate with Americana – steel guitar, mandolins, songs about lost love, America’s obsession with guns – there’s even a song about a wood chipper (a cover of the John Hiatt song).

The album’s strength is Demker’s superb voice and the couple’s excellent harmonies especially on the two ballads ‘Stronger’ and ‘Loving Breeze’ which are the standout tracks on the album.

The songs themselves are all well written but for the most part lack the “must listen” again factor. There’s nothing wrong with the album but it doesn’t really stand out from the crowd and it feels as if it’s all been done before. In the band’s press release it says: “This results in a record that should please every throbbing Americana heart out there”. Maybe it will, maybe it won’t – it’s really up to the listener to decide for themselves.

A pleasant debut album from the Norwegian duo