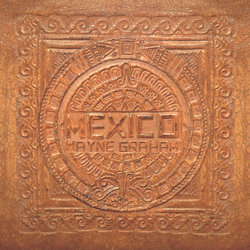 Wayne Graham is a duo, Hayden and Kenny Miles, brothers from Whitesburg, South-East Kentucky, where their father founded a church and they backed the services on drums and bass. Wayne Graham is a composition of both their grandfather’s first names. Both were coal miners, as were their father and uncle, until the closure of the mines, following the strikes of the United Mines Workers in the 1970’s. Barbara Kopple’s Oscar winning film “Harlan County USA” depicts the area at the time – a reminder of the miners strikes in the UK.

This is Hayden and Kenny’s fifth album, but the first to be released in Europe. The fleeting details of everyday life find form in Kenny’s voice and Hayden’s rhythms. It’s there in the first track Borrowed Bed with “snow on the streets” and “a pink paper slip” which share with us the straightforward, yet stark and moving details of everyday life. To help them on this track, the Miles brothers have used Jim Oblon, major Nashville guitarist.  At the end of the song, his playing is like the howl of knowing.

Track 2 Mexico is the early centre of the album. What shapes the whole album is the death of Hayden and Kenny’s best friend last October. The three had played music together since they were children, and their mourning, “easy on the resting eyes” is moving in its simplicity, the idea of their friend’s soul, making its way down to Mexico. As you become familiar with Kenny’s voice, and aware of the careful production, with Hayden’s rhythms in the drums and keyboard, you are captivated.

It is interesting, noticing the guest musicians, playing on the album, for instance Dave Prince (from Luna and The Mountain Jets) on Cliffs of Dover. These people add credence to the collection. Listen, for instance, to the ending of this track.: Kenny and Hayden gently exploring tentativeness in the lyrics: (“Do I come up/ From time to time?”) and just the flash of Dave Price’s guitar summing up a positive ending to the equivocation. Outstanding.

Wherever you might dip into this album, there is always interesting detail.  In Wooden Frames for example, there is, in narrative, a sense of what is left afterwards; in music, Kenny singing, Hayden, on drums,  Mike on wind chimes. And overall, gently picking, five notes: “Why did I cause you so much pain?” All of which gives you time to pause and think, behind a keen sense of hook and implied narrative. On the last track, there is Jim Oblon’s unforgettable guitar again, the wolf outside, and the words, “When the money’s all gone/ And the cattle go home/…. You are your fellow man.” Here is understated, yet deep, true and spiritual understanding.

Modern Appalachian music at its best. A huge album that insists on careful appreciation.