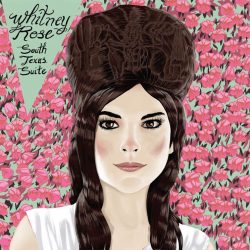 Six tracks lies somewhere between an E.P. and a mini album, depending on your point of view. Though that’s of little matter when “South Texas Suite” is a thing of such beauty. A Canadian now residing in Austin, Whitney Rose is accompanied here by the seemingly obligatory line-up of musicians who have backed up the great and good (Cash, Willie Nelson, Haggard, The Mavericks) and between them they nail down the groove to perfection. Rose happily describes the collection as a love letter to Texan musical culture; which is hard to argue against with the evidence she presents here.

Opening track Three Minute Love Affair is a Tex-Mex two-step delight. Next up, Analog is a paean to pre-digital days, gently rolling on a jazzy, western swing vibe. Boots is a full on Honky-tonk homage to the legally obligated footwear for all Texas residents. Following on, Blue Bonnets is blue eyed country pop – Tears On My Pillow and To Know Him Is To Love Him are close musical cousins. Final track How ‘Bout A Hand For The Band is the sound of here erstwhile sidemen cutting loose Buckaroos style.

A harsh critic might argue that an instrumental closer is essentially filler. It’s probably a little too much fun to be so easily dismissed though. Throughout, Rose’s voice errs on the gentle side of sassy; reminiscent of Eddi Reader in places, who most will appreciate can carry a tune! Female country singers are at the forefront of the genre right now and Whitney Rose fully deserves her place amongst the very best.