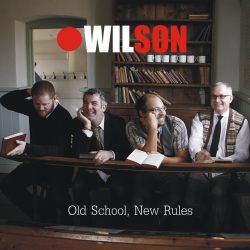 This is a slice of well-crafted, Seventies-leaning pop that’s light on the power but heavy on the catchy melodies. West Country troubadour Steve Wilson is the writing hub of this four piece. Admittedly, they’re quite hard to define musically, but there are places to start. The harmonies (contributed by the band to most of the tracks) are unswervingly excellent, with echoes of the Beach Boys, the Beatles and 10cc. Whilst the music isn’t too heavy on guitar, Tom Petty is brought to mind on the opening two tracks, Long Road and Pretty Girl In A Small Town.

A raft of slower ballads occupies the middle of the record. So many together does slow the pace of the album as a whole, perhaps a little too much too early on. The pace does pick up though, with You’re The One and Hazard On The Road. A minor criticism is that Steve Wilson’s vocals aren’t the strongest you’ll hear; he’s a bit pitchy in places, particularly at the top of his range in You’re The One.  The harmonies again though, even on this weaker track, are sumptuous.

Track eleven, Piece of Mind is arguably the best song. Just Wilson himself, accompanied by piano, singing in a low register which works much better for the man. Kudos to Wilson for making a record so out of step with fashion and trends.

About Mark Nenadic 77 Articles
Quite likes music. Doesn't really like people. From The North. Exiled in The Midlands due to radical views on whippets/flat caps. Beards and plaid shirts belong on Willie Nelson. Everybody else should smarten up a bit ..