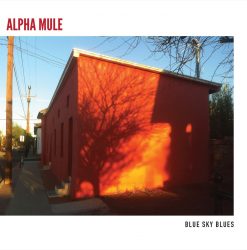 So, is it possible to ‘do music’ as a side-line? Alpha-Mule are a self-identifying “Californian Americana band” – essentially the duo of Joe Forkan on guitars and vocals, and Eric Stoner on banjo and guitar. They have produced new music, spread over two lps, whilst pursuing actual full time salary paying careers in the visual arts and education. So a listen to these records may give some clue as to the answer to that question. This new music is their second outing following well received debut ‘Peripheral Vision’, released over two years ago.

The first release and the ‘proper’ album is ‘Blue Sky Blue’. ‘Something in the Water’ came a few weeks later and its subtitle of ‘First Takes & Second Thoughts’ gives a clue to its nature with a mix of re -recordings of old songs, remixes of songs on ‘Blue Sky Blue‘ and just a couple of new tunes. A companion piece rather than an “odds n sods” record perhaps. Here we’ll focus on ‘Blue Sky Blue’ with the occasional acknowledgement that there is also ‘Something in the Water’.

Taking from their self-description again, Alpha Mule’s music is “largely influenced by traditional country, folk, rock, bluegrass, and blues” (wot, no jazz or hip-hop?). This ranging around the genres without ever fully nailing any of them tends to the sound of ‘peripatetic supply-teacher’ Americana. Vocally (and to a lesser extent musically) there is a cast of characters on display that creates an almost theatrical feel to the record. So for example we get ‘Window out of Here’ that is musically and vocally reminiscent of Lyle Lovett with the archest of eyebrows.  Also ‘Moon Dogs’, a lovely plaintive ballad that is the epitome of this presentation of characters. In the space of three minutes 47 seconds it manages to invoke the spirit of Jim White, Richmond Fontaine, The Friends of Dean Martinez and Tom Russell (at least!). Despite all this the record does manage to remain oddly coherent. It avoids the aloof over complication that can beset this kind of collection, offering instead a sympathetic Vaudevillian folk-troubadour aesthetic that permeates the grooves.

Aha! I hear you exclaim, “Vaudevillian folk-troubadour” – Tom Waits surely? Well perhaps. There are two covers across these albums, both of them songs by Waits. ‘Strange Weather’ is a non-more Waits reading of the song and could almost be a reference point for the overall sound of ‘Blue Sky Blue’. Maybe the added Waits is in here to bring the grit that is needed to produce the pearl, because this is what is missing from their own songs. These sound appealing but the particular spark of interest to really grab our attention is largely absent, nothing truly sticks with us and each time we listen is like the first time. Only far too rarely do we get moments that might offer the spark that we seek. Like the use of prominent bull fiddle on ‘Ironically´ and ‘Hand to Hold’ that affords a nice loping gate, which would be great to hear more widely across future records.

Forkan and Stoner are earnest and committed, determined to do a good job and trying really hard to get things right. There is no doubting their attention to detail. Whilst their craft is evident throughout they don’t quite generate the connection with the listener of really good records. We can appreciate their skill but not quite feel their love. Evidence for this can be found on the ‘Something in the Water‘ companion piece, where they seem to let loose and play with more freedom and less concern over the technicalities and the sound is all the better for it.

Lyrically the record remains opaque and somewhat unfathomable. Alternatively, if you prefer, they provide the listener with plenty of space to enact their own readings of the songs; though this may turn out to be a difficult proposition. Indeed Alpha Mule seem to offer a warning against too close an inspection of meaning “be careful not to pry you don’t want to know who’s on the line, still trying to make up your mind but it gets stranger all the time”. What we might discern perhaps, is a pervading sense of loss or unease, a dissatisfaction with self and even a desperation for change. There are no simple narratives on offer in songs that seem to consider the inner workings and drivers of people’s thoughts and emotions, often from a third party perspective, in a way that can give them a distancing effect. As a result it can be hard to find any signs of hope or confidence for the future in these songs.  Indeed, the record tails off into the distance with the banjo flecked instrumental ‘If I Return’,  a downbeat, almost throwaway sign-off that seems to emphasise the lyrical lack of light at the end of the tunnel.

The extended psychedelic run out of the 7 minute plus version of ‘Something in the Water (Rabbit Hole Version)’, illustrates the issue at the heart of the matter. This version of the song is to be found on the second lp and is just ‘more’, in every way. It goes where they daren’t (don’t want to?) on ‘Blue Sky Blue’, having a loose playfulness that is most welcome. Being less concerned about the craft and more about the heart/feel might just be the way forward.