Last week we were considering the wide diversity of tastes that our writers have shown in their selections. As if to emphasise the point Manchester based AUK writer Mark Johnson has produced our first list where all ten artists are either female or partly female. The under-representation of female artists in these lists has been debated before and there are legitimate historical reasons for it. In a nutshell, women have for far too long been under-represented in all forms of music and americana is no exception. Therefore there are simply fewer female artists to choose from. I suspect that if we were to choose the top 10 albums of the 21st century there would be a far greater female representation and Mark’s list, all taken from the last twenty years, reflects that. It also goes a little way towards addressing another common criticism that there have not been enough more recent releases included, but that’s a whole different debate…. END_OF_DOCUMENT_TOKEN_TO_BE_REPLACED 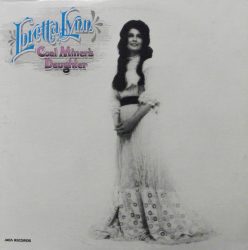 It is rare that an artist will create an album mid-career that turns out to be their defining one but that is exactly what Loretta Lynn did with ‘Coal Miner’s Daughter‘. Returning to her humble beginnings, at the age of 39 Lynn looks back at the Tennessee that shaped her into the fantastic performer she had become and would continue to be. Loretta Lynn has been nominated for fifteen Grammys, three of which she won. She has had three songs banned from radio play for their outrageous political content – content such as contraceptive pill and divorce. She has so far produced 49 studio albums, 36 compilation albums, and 2 live albums. Her most recent is set to come out next year. END_OF_DOCUMENT_TOKEN_TO_BE_REPLACED

Continuing with our series of features on The Unsung Heroes of Americana,  where we take a look at some of the people, places and things that help to bring this genre of music to life, Richard Phillips is back with a profile of a man who likes to keep things simple but always taps into the real sound of the musicians he works with; Nashville based producer, Dave Cobb. END_OF_DOCUMENT_TOKEN_TO_BE_REPLACED

Sadly we are coming to the end of our present series of ‘The Twang Factor’. Next week we will be giving you the opportunity to vote for your favourite act from the present series. The act receiving the most votes will then be invited to record a Twang Factor winner’s slot for us. ‘The Twang Factor 2’ will be launching in February 2021 with more great new and under-recognised acts. END_OF_DOCUMENT_TOKEN_TO_BE_REPLACED

Well dear reader, here we are again and while normally we’d say things like “I can’t believe it’s been a year since the last poll, doesn’t time just fly” etc. mainly because we’re all about 80, this year has felt like a decade, and a decade in which most artists have either released covers albums or acoustic reinterpretations of their back catalogue played on colanders and wooden spoons. Still, there’s arguably never been a more important year to support music and actually there have been some diamonds in the rough out there, some gems amongs the cracker rings. END_OF_DOCUMENT_TOKEN_TO_BE_REPLACED

Here we are again with a new “VERSIONS” in which our writers examine the whys and wherefores of different artists treatment of the same tune. This time out Clint West puts ‘Dead Flowers’ under the microscope: END_OF_DOCUMENT_TOKEN_TO_BE_REPLACED

I didn’t know that ‘Wristband’ song before and, if I’m honest, I never much cared for Paul Simon, so I’m juggling this catch from Tim already. Having listened to the song I wasn’t immediately sure where to go. I found it a touch smug and self-satisfied; though that might be what passes for humour in Queens. If so maybe Mr Simon should remember what my gran used to say before reciting her famous anthropologist story once more – “if you’re gonna do jokes, make ‘em funny”. Damn, nearly dropped the catch clean there; my hand-eye coordination was never good enough for fielding in the deep. END_OF_DOCUMENT_TOKEN_TO_BE_REPLACED

Throughout this challenging year, Americana-UK has posted occasional ‘mini-gigs’ to connect artists with their audiences.  At a time when attending live music events was out of the question for many, these little shows, from artists’ living rooms to yours, was a way of spreading the joy music can bring.  Now, for the first time, we bring you a full 40-minute concert film from Dutch singer-songwriter VanWyck. END_OF_DOCUMENT_TOKEN_TO_BE_REPLACED

We here at Americana UK get a lot of song offers for features throughout the year.  And from late October a number, an increasing number as the days pass into November, are Yuletide themed.  The joys of banjos and snow and fatted geese (or suitable Vegan alternative) and folk-rock so hard it edges towards metal.  We love Christmas.  Mainly because of the banjos, snow,  and fatted geese (or suitable Vegan alternative) – but we love Christmas songs as well.  If there’s a huge argument or someone passing out drunk in the snow so much the better.  Tradition – we’re all about tradition. END_OF_DOCUMENT_TOKEN_TO_BE_REPLACED

AUK has managed to get a bit of treat for our more discerning readers thanks to Chris Metzler of Décor Records. It is a 40-year-old recording of a live concert at Urban Noize, Portland, Oregon, on November 21st 1980 when Tony Kinman, of West Coast punk legends The Dils, first sang a song with his brother and also ex-Dils Chip Kinman’s new band Rank and File. Joining the brothers are a young Alejandro Escovedo on guitar and Barry Myers, tour DJ for The Clash, and it is the only known recording of this line-up. Rank and File can lay a credible claim to being the first alt-country band END_OF_DOCUMENT_TOKEN_TO_BE_REPLACED