The Country Music Association is something of a walking disaster zone at the moment. Some stalwarts who died this year were honoured during the 2020 CMA awards show last night, including Kenny Rogers, Charlie Daniels, and Mac Davis, but three other recently deceased icons went completely unmentioned during the broadcast: John Prine, Jerry Jeff Walker, and Billy Joe Shaver. And this has not gone unnoticed – Jason Isbell and Amanda Shires have announced that they’re returning their lifetime membership cards to the Country Music Association. In a tweet Isbell wrote: “I doubt anybody will care, but we cared a lot about our heroes.” END_OF_DOCUMENT_TOKEN_TO_BE_REPLACED

Joe Biden won the US election on Saturday in case it’s passed you by, but at the time of writing he also looks like he’s on the way to winning Georgia and if that happens, Jason Isbell has announced that he’ll “make a charity covers album” of his favourite songs from the State. The singer-songwriter, originally from Alabama, revealed that he’ll record a covers album featuring songs from “REM, Gladys Knight, Vic Chesnutt, Allmans, Cat Power, Precious Bryant, Now It’s Overhead, etc. And damn is that gonna be fun.” END_OF_DOCUMENT_TOKEN_TO_BE_REPLACED

And we bet you never thought you’d see that headline. Bee Gees frontman Barry Gibb has announced a new album titled ‘Greenfields: The Gibb Brothers Songbook, Vol. 1.’ The record is inspired by Gibb apparently being a lifelong fan of country and bluegrass music and includes a string of familiar names from the world of country and americana including Dolly Parton, Gillian Welch and David Rawlings, Sheryl Crow, Alison Krauss, and Jason Isbell who he duets with on a track called ‘Words of a Fool’ which you can listen to below. END_OF_DOCUMENT_TOKEN_TO_BE_REPLACED

Jason Isbell and the 400 Unit have been playing several fairly rainy nights of socially distanced performances at the Caverns venue in Pelham, Tennesse which concluded on Sunday night, but the previous night’s show took place on the birthday of the late John Prine. In honour of that occasion, Isbell and wife Amanda Shires played a belting version of the Prine classic ‘Storm Windows’ which was appropriate given the weather at the time. It’s not the first time they’ve played the song – indeed in 2014 the pair even got to sing it with its creator at the Grand Ole Opry. You can watch some of Saturday’s performance of the song below.

At yesterday's afternoon show, on John Prine's birthday, the buzz was would Jason Isbell cover Prine—of course he would, but what song? During the encore, on a rainy afternoon, Isbell pulled out the Prine classic "Storm Windows." Music is magic. Who knows how many more times we'll have like these to experience it live in 2020? Get yourself to The Caverns this evening for Jason Isbell and The 400 Unit. Tap the bio link for pods. John, happy belated birthday! Love, The Caverns Captured by @blondeambitiontour #stormwindows #encore #werenotcryingyourecrying

That’s it from us for another week dear reader, and we leave you with something fairly stunning from Jason Isbell and his band who’ve released a rare video for one of the tracks from their most recent album ‘Reunions’. Isbell has been fairly quiet over the last few months, appearing intermittently with wife Amanda Shires on their lockdown I So Lounging streams, but he’s back to doing live shows over there, as crazy as that might seem here right now (outdoor and socially distanced of course). The video for ‘Only Children’ is written and directed by Kurt Simpson and produced by Beth Martychenko, and follows two friends on a late-night adventure in the suburbs who chase after a backpack which falls off the back of a truck, which then starts glowing. Read into that what you will. The song about a childhood relationship which ends when the life of one of the characters dies is absolutely devastating btw. On that note (!) have a good one, and take care.

That is a wrap from us this week dear reader. We leave you with a clip of Jason Isbell and Amanda Shires performing one of NPR’s marvellous Tiny Desk Concerts but this time at home. People can have desks at home you know. The songs are all from Jason Isbell and the 400 Unit’s Spring release ‘Reunions’ which feels like as apt a title for an album this year, or maybe next year. As Jason says, this year has “been a little difficult, we haven’t gotten to do the thing we feel we were born to do.” This is probably the next best thing though. Have a good one.

Amanda Shires and Jason Isbell have released a new song called ‘The Problem’ in which they take on the characters of a couple having an honest, difficult conversation about abortion. The track’s release coincides with International Safe Abortion Day which took place earlier in the week and proceeds from its sales will go to the Yellowhammer Fund, an Alabama based reproductive justice organisation. In the last year, draconian, punitive abortion laws have been enacted in Alabama and neighbouring states. “The South is in need of a lot of help,” Shires told Rolling Stone: “I don’t understand why it’s such a big issue, as big of an issue as it is. Because once you have a baby, there’s no social programming to help. It’s all control.”

The rampant top ten features provide a quick and easy way to access key aspects or themes running through the music that fuels this site and enriches our todays. And now we reach a key influence in many, many of our artists and indeed our own lives. Drugs, of whatever hue, have often provided a spark for creativity and yet they have also in may cases stripped personalities of that very creativity which they seek to communicate. I have not included alcohol in this list which it could be argued has done more damage than any other drug to our particular genre and yet is still celebrated by both artists and listeners alike. END_OF_DOCUMENT_TOKEN_TO_BE_REPLACED

You may have seen Van Morrison in the press last week raging against restrictions because of Covid with a new batshit song which goes: “No more lockdown / No more government overreach / No more fascist bullies / Disturbing our peace… No more taking of our freedom / And our God-given rights / Pretending it’s for our safety / When it’s really to enslave …” Ahem. Anyway Jason Isbell has taken note on his wife Amanda Shires’ weekly YouTube show I So Lounging, where he comments: “[Van] likes to say things, like the government asking you to not give everyone the COVID-19 virus is akin to slavery. I disagree with that statement very much.” Then putting on a mask he says, “I don’t know that this’ll protect me from the virus, but I’d like for it to protect me from Van.” They then do do a delightful cover of Van’s 1970 song ‘Into The Mystic’, so you know, we can still all be friends.  Watch below. 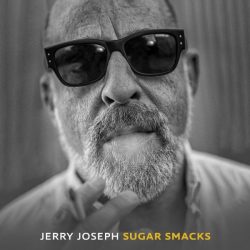 When Patterson Hood of The Drive-By Truckers describes you as “long one of my favourite songwriters, one of the absolute best of our generation” people are going to sit up and take notice and so it is that this album has already attracted a great deal of interest, even prior to its release. Hood produced the album and the Truckers provide the backing to Joseph’s songs further adding to the anticipation. So, who is Jerry Joseph, and does the album live up to expectations? END_OF_DOCUMENT_TOKEN_TO_BE_REPLACED