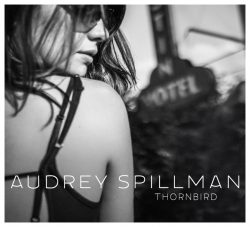 It’s a sultry slipcase that drops through the letter box following a Facebook conversation about the merits of sending out physical versions of an album to review, and it creates an element of wondering what the record will be like; the answer is simply, it’s a wonder. The Producer, Neilson Hubbard, is fast becoming the go to man for the musical traveller from the UK and a watch word in records of quality.  This is no exception.  It’s full of storm, naked emotion, passion, quirky musical stylings that leave you going “oh I love that”. Essentially a last shout before impending motherhood, Spillman has made a very modern, genre-bending record.  It will go on to be many things to many people, a returner, which 10 years from now you’ll slip from the rack and greet like an old friend.

Rising Up is a prod in the ribs of your conscience, it’s an anthem in a time of heighten anxiousness, instability abounds, yet Spillmans’s ability to hark back to ‘better’, if only nostalgically, times, gospel, 50’s rockabilly (Amy) establishes this as an album of weight and worth, yet remaining firmly rooted in 2016.

Spillman could be similar to King, Mitchell or Whitehouse, a rare artist that can transcend times, genres and her beautiful, clear and precise voice reaching into your soul – kissing it better.  Although made in Nashville it owes more to Bush than Parton, wonderfully full of delicious guilty pop pleasure, and laced with hooks you’ll never tire of listening to.

Nashville has the odd concession – I’ve Got to Have You, a duet with Kris Kristofferson, is achingly beautiful, simple strummed guitar and piano, full of jilted lovers woes.  A stirring fractured love ballad, it and the others appearances and credits (K S Rhodes, Ben Glover, Robby Heicht) are testament to a record exquisitely produced, delightfully played and wonderfully sung.

Steaming, erudite songwriting of a class often reached for and missed, but not in Spillman’s case.