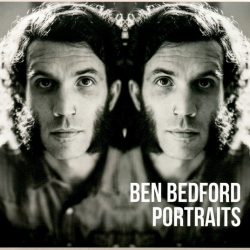 “I hope this retrospective proves to be an enjoyable introduction for the uninitiate, as well as a satisfying listening experience for the long-time fan.” So writes Mr Ben Bedford himself, succinctly self-reviewing. That his prose flows is no surprise, as he must be heading towards polymath status? As well as being a tuneful, literate and humane songwriter, he has a warm, strong and clear singing voice matched by his bright and resonant guitar style. His website shows many of his artworks (mainly sold), and very relevantly, his degree is in History. (His sideburns almost deserve an award themselves.)

‘Portraits’ is Bedford’s selection of tracks from his first three albums, between 2005-12, which never received an official transatlantic release, so titled as each song evokes a picture of people, places, events or memories. Bedford’s tales are rooted in a heartland America, especially his home state of Illinois. If Sufjan Stevens hadn’t already written his magnum opus to that state, then Bedford could easily be held as it’s laureate for his lyrical descriptions. Opener ‘Lincoln’s Man’ sets the perfect tone for its epic telling of a Union soldier justifying his chosen side in the mutually destructive Civil War. Further on in ‘Twenty One’, a young Union soldier describes watching his side destroying Vicksburg, willing the Confederate commander to surrender so the private can help to save and protect. ‘What We Lost’ relates the death in WW2 of his grandfather’s brother. Bedford isn’t a solo performer on this compilation, but his voice and guitar are front and central, his diction and delivery so clear that a lyrics sheet is surplus. Tracks are subtly seeded with banjo, dobro, cello, slide, pedal etc, the unobtrusive arrangements somehow making the instrumental contributions more strikingly effective than if layered on. ‘Amelia’ is the most driven band sound, its momentum ideal for propelling the tale of the doomed aviatrix. Here as much as anywhere else does Bedford’s historian background evidence, a tale told that transports the listener to a different place, time.

Not all songs are history lessons: ‘Guinevere Is Sleeping’ involves watching tenderly over a wife, whilst ‘The Sangamon’, with its marvellous picking technique, starts beautifully until it is evident that our narrator is throwing everything into the river because his pregnant wife could not be saved, the sadness piercing. There are touches of Gordon Lightfoot or Townes Van Zandt in these songs, but John Steinbeck is surely the greater touchstone. Bedford is a boon of a storyteller, a true heir to the classic US folk singers.