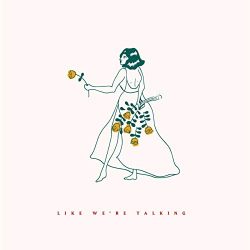 In the 1970s cult science-fiction comedy novel ‘The Hitchhiker’s Guide to the Galaxy’, given the billions of planets floating around the universe, the description for Planet Earth is limited to two words: “mostly harmless”.  And, regrettably, “mostly harmless” could also apply to Nebraska-born singer-songwriter Betsy Phillips latest EP, ‘Like We’re Talking’.

That’s because this collection of languidly paced electric folk-pop, capped by Phillips’ ethereal, soft-voiced singing style, is unquestionably easy on the ear. But the relentlessly smooth landscape of sweetly purring guitars that dominate most of the EP’s six tracks ends up feeling too well-wrought and featureless for its own good.

This is a pity, because when Phillips’ voice gets the chance to break cover, it turns out there are some  sharply intelligent, painfully mournful lyrics about love, loss and broken relationships submerged underneath.

The opening title track, ‘Like We’re Talking’ for instance, is about when an older friend passes away, but – intriguingly – from the deceased person’s point of view. Within that, with a brilliant and ever so slightly creepy mixture of nostalgia and wishful thinking, Phillips observes how even the most everyday of moments or activities can intensify emotional connections – and, heart-breakingly, subsequently underline their loss.

“Just remember every time you hear that record it’ll still be ours forever / When you’re walking and you see the red leaves falling, it’ll be just like we’re talking.”

Then on ‘Yours to Forget’, Phillips hones in equally powerfully on the perilous instability and lingering attractions of a crumbling, but not quite totally broken, relationship.

“You leave me lonely in the morning / You kiss me slowly between goodbyes / You taste like bourbon and cigarettes / You are not mine, but I’m yours to forget.”

Track three, ‘Someone Like You’, the most upbeat of all the tracks, chugs and clatters along pleasantly enough, and if – like the rest of the album’s music – it doesn’t feel particularly adventurous, an electric guitar solo suddenly stuttering away in the background adds some timely vitality.

So far, so good-to-goodish. But then the second half of the EP dramatically sags both in pace and content. Instead, there’s an uninviting treacle of insipid nostalgia for childhood homes or failed relationships, all set against a backdrop of inoffensive, claustrophobia-inducing expanses of softly shimmering guitars.

“We drive by but we don’t stay”, she sings on one of these latter tracks. And to be honest, the temptation to make a U-turn in the road back to the much more effervescent first part of ‘Like We’re Talking’ is all but irresistible – and maybe before any similarities, rather than the differences – between the two halves of this very unevenly successful EP become too apparent.