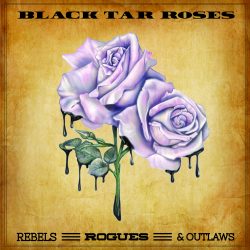 There is sometimes a danger of folk albums – and especially those labelled in sub-genres such as Dark Folk, as the release notes for this debut offering from ‘Black Tar Roses’ describe the band – to be a touch homogenous, with songs too standardised and samey to enjoy listening to as a whole album. Fortunately, this is not the case with ‘Rebels, Rogues and Outlaws’, an album of songs with enough diversity to keep things interesting.

‘Black Tar Roses’ are husband and wife Darren and Sally Long, ably assisted on the album by John Maddock and Josiah J, among others. It opens with ‘Ned Kelly’ and tells of sailing away on a prison ship, “jailed for being poor”, singing of corruption and lies, all with some venom…“rough justice from the gallows, such is life”. Another song about outlaws, ‘Thunder and Lightning’ follows, telling of lovers being on the run from the law….“and walked together like Bonnie and Clyde”, with perhaps the added thunder sound effects a little unnecessary. After the opening outlaws, it’s rogue time with ‘The Midnight Rambler’, a master moonshiner, a legend in some folks eyes, “like his dad and his granddaddy before….” Nicely paced track, with a touch of The Gypsy Kings in the middle 8.

‘The Lament of the Prodigal Son’ opens like the beginning of a Godfather sequel or maybe some Greek tragedy….interesting. An alternative view on said prodigal… “I broke the olive branch and you shot the dove….” Fiddle and mandolin underpin everything, with a strong Shane McGowan/Pogues vibe happening. ‘Idle Hands’ has an excellent slide guitar opening and reverb on the vocal creates a feeling of the storyteller being somewhere in trouble…. “centuries have passed since the start of my plight, you see I traded my soul for eternal life.”  Strong harmonies here, too.

Time for another outlaw, ‘Fingers Malone’, which opens like a 78rpm record, all scratchy and jumps, with an old Joanna, banjo and rim shots pulling it all along. Sounds a little like he’s related – in stage musical terms, at least – to Bugsy. Fun but perhaps not the strongest of songs.

‘The Cattle Thief’ is more traditional folk in structure, a story of interracial love and slavery, all under haunting harmonies, piano, guitars and mandolin. One of the standout tracks on the album.

The call and response ‘Dance Around The Fire’….(her) ”now you’re nothing but a drunken bum”, (him) “look who’s talking Blobby Sue” detail the state of this particular relationship, followed by ‘Might Have Been Some Angel’, another very strong song, with a slow picking guitar opening, which builds into slide guitar and an interesting change of pace, which tells of meeting a stranger: “hey, hey, he might have just been some angel”.

More seafaring adventures feature in ‘Through The Sea Foam Green’, which closes the album, “this cursed ship of fools”, sailing “on for eternity” – the kind of song that would end any live set – as well as this album – perfectly. Even if it is a little naïve, with the pirate accents and the chorus line “we’re all going to hell in a handbasket.”

The vocals of Mr and Mrs Long complement each other very well on this album, grittiness balanced with sweet and light and there some very good songs to enjoy. The band are currently writing songs for their second album and it will be intriguing to see if they can maintain this promising start.

Strong debut of dark folk and americana from Plymouth-based band