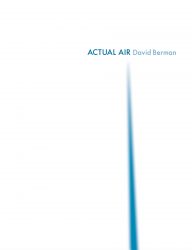 It seems poetry books are a bit like buses – you wait ages for one and then two come along at once! Following on from our recent review of Doug Hoekstra’s ‘Unopened’ we now have David Berman’s acclaimed ‘Actual Air’ to evaluate – and this is quite a different beast! To start with, Berman’s book is a re-issue; originally released in 1999, this collection of modernist poems saw Berman hailed as a natural successor to Wallace Stevens and drew major critical acclaim from the likes of The New Yorker and G2. Twenty years on the impact of these poems has not diminished in the slightest. Now it is being re-issued, initially as a limited edition (one thousand copies) hardback, with a paperback run scheduled to follow.

David Berman will, of course, be known to many as the creative force behind The Silver Jews, the band he formed in 1989, initially with Stephen Malkmus and Bob Nastanovich of Indie rock band Pavement, and ran until he disbanded the outfit in 2009. In recent years Berman has stepped back from the spotlight, writing poetry and essays that he has released via his Menthol Mountains blog. Now, with the re-issue of this seminal work and news that he has returned to recording with his new band, Purple Mountains, there’s much speculation that a new volume of his poetry could be in development – he certainly seems ready for a return to the public eye.

And what of the poems themselves. Those that know his songs will know that his music is pretty uncompromising stuff and that same attitude of no compromise runs through his poetry –

“Nothing had changed. He had retained his tendency
to fall in love with supporting actresses renowned for their near miss with beauty” (from ‘The Homeowners Prayer’)

Many of the poems have a surreal quality and what appears to be a stream of consciousness approach to their content. ‘Actual Air’ is the only book of poems that Berman has produced to date and it is fascinating to read so many of his verses in one place. This collection of poetry is not an easy read; shot through with strange imagery the author has described these poems as a “journey through shared and unreliable memory” and they do feel like a sneaky peak into the darker recesses of the writer’s mind and the strange things that go on there, almost as if you’re hearing fragments of dialogue between unidentified guests in an underlit room. It is a fascinating read that, every so often, throws up seams of dark humour –

“Walking through a field with my little brother Seth
I pointed to a place where kids had made angels in the snow.
For some reason I told him that a troop of angels
Had been shot and dissolved when they hit the ground.” (from ‘Snow’)

““I refuse to be the middleman in a relationship
between you and the florist”
As they walked through the city,
He explained why he would never buy her flowers.” (from ‘Coral Gables’)

If you like poetry that challenges and entices you, that is weird and wonderful in equal measure, then you’ll want to read this book.