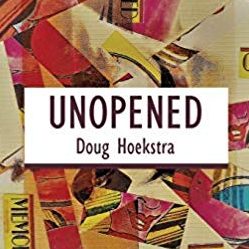 “In the unfinished basement
past stainless steel filing cabinets, humming humidifiers and stacks of yellow magazines
I reach two racks of records promised to us both; My heart can only take a few, including “Memories of a Middle-Aged Movies by the other Ray Charles, unopened, never played…. purchased at Rose Records for 77 cents, my father killing time on a 60-minute lunch hour
40 years before.”

This is the title poem from Doug Hoekstra’s latest collection of poems “Unopened”. It’s a collection of gentle, reflective poetry; recalling times, people and events in wistful reminiscence.

This is a first for our book reviews – a collection of poems, but it is surprising that we haven’t had poetry before since many songwriters also dabble in this art form. Hoekstra himself is something of a renaissance man, being a writer of both prose and poetry as well as a Nashville-based musician and songwriter with nine albums under his belt. Impressive that he finds time to fit it all in, especially as he tours extensively both in the States and Europe.

What’s nice about this collection of poems is that it is exactly that. Often poems from songwriters are either their song lyrics presented as poems or you can see a clear link in their writing style. Hoekstra’s poems have a similar feel to his songs but they are most definitely poems, there’s even a sonnet in there, ‘The Radiator Sonnet’, fourteen lines in iambic pentameter!

The collection divides up into three sections. The opening section, “On the Page” deals with themes close to home, like the title poem shown above. “Off the Canvas” houses poems that deal with the wider world, such as ‘The Meadows’ and ‘Officespeak’ and, finally, we have “Between the Notes”, in reality housing those poems that don’t fit into the other categories and are more indefinable, such as ‘Vinyl’, with the opening verse:

It’s a very good poem that goes on to describe the full experience of playing records and the memories they evoke; it struck a real chord (pun intended) with this old vinyl junkie!

This is a good collection of clever and insightful poems that is a genuine pleasure to read. It’s nothing earth shattering and there are no deep, dark revelations in this writing, but it is food for the soul, something to read in a garden on a sunny day or late at night by the fire, with a glass of wine.

Gentle and reflective poetry that's a pleasure to read.