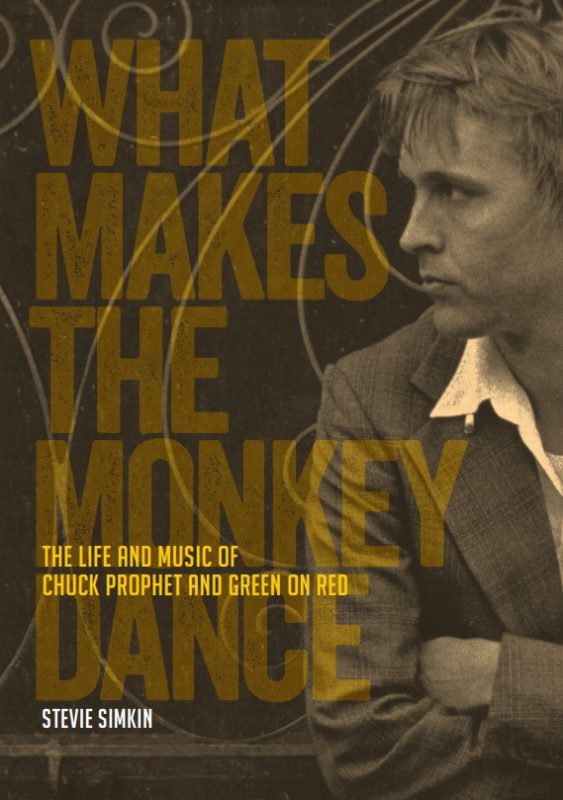 What Makes The Monkey Dance is the polar opposite of the standard ‘Cut and Paste’ rock biography. Author Stevie Simkin is an academic, and has applied all his stringent research techniques to documenting the career of an artist and a band whose profile, although ironically higher today than it ever has been, remains under the radar of the general public. Simkin cheerfully admits that part of his motivation is to rectify this injustice.

Particularly refreshing is the lack throughout of rock biog clichés. Simkin thankfully omits the traditionally obligatory first three chapters charting the artist’s irrelevant family history, and while Prophet’s life has had its share of rock and roll excess, there is little lurid coverage of this. It’s a music book designed for knowledgeable music followers, and the neat structure, based largely on analysis of individual albums, makes it particularly appealing. It’s billed as a book about Green On Red and Chuck Prophet and that it is what it is – a committed piece of research with no padding or self-indulgence. The author has benefited from access to all the main players in the story, including Chris Cacavas, Dan Stuart of course, Kevin T White and, crucially, Chuck’s musical and lifetime soulmate Stephanie Finch. The creation of each album is described clearly and with insight, as well as hints of the often fraught behind-the-scenes interactions with a series of record companies and management relationships. The trump card is that the work has been achieved with the full co-operation of Prophet himself. The two of them are friends, and Simkin has coaxed a self-deprecating and quietly humorous bank of career details and anecdotes from a long and chequered life in music, related in the unmistakable Prophet voice.

No expense has been spared with the sumptuous production value, with over sixty photos, mostly previously unseen. Prophet himself remains philosophical and pleasantly optimistic despite the current parlous state of the music industry (given strong and clear coverage early on in the book) and it’s a pleasure to see such recognition of one of music’s most supremely gifted songwriters, players and showmen. Please may it not be long until it’s available on merch stands at live shows.

What Makes The Monkey Dance is published on August 21 by Jawbone Press.