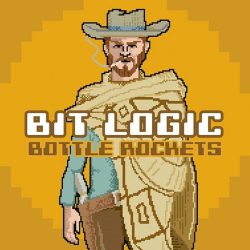 Have you ever looked around you, conversed with your peers and concluded that you’re out of touch with society; marginalised on the fringes of a world obsessed with just about everything and everyone that you are only vaguely aware of? The great Guy Clark put it out there post-tech revolution with ‘Analog Girl‘ back in 2006 and fourteen years later Clark’s fellow country outlaws, Bottle Rockets, have taken up the theme and taken it to another, glorious level. Not that Brian Henneman, Mark Ortmann and the Rockets are new faces singing old tunes. The great thing about ‘Bit Logic‘ is that these outlaws are embracing the changing face of the music business and injecting a freshness into an ancient art form that would have Waylon raising a wry eyebrow in silent approval.

Locals at the AUK bar need no top up, but for all you cheeky one-timers stopping in for a quick one, here’s the Bottle Rocket low down. Missouri through and through, the Rockets are what you might call the thinking man’s outlaws. Not to dwell on it, but we’re talking groundbreakers. From Earle, Dale Watson and Wilco to the Medicine Show the influences are as heavily drawn as they’re dealt, and if there are too many comparisons being made then that’s only because there is so much going on under the radar.

Then there’s the Bottle Rocket mantra itself. Opening and title track ‘Bit Logic’ should dispel any misconceptions joe punter has of what they might be. Here is a band that has reinvented itself and can be summed up in three simple words: fresh, original and dirty. Only hardened revivalists like Henneman could get away with croaking, “A jaded waitress told me yesterday/Times ain’t what they used to be/It’s all shallow cellphone selfie vanity” and sound current. Because in the context of this revival he is current. And outlaw country has certainly never sounded so current. The heartache and earache of what we all crave still resonates in songs like ‘Lo-Fi‘ and ‘Silver Ring’; the twang is there, the jailyard poetry survives the push into 2018 with style and the downhome ‘grandaddy’ country of songs like ‘Knotty Pine‘ are going to change the world – if only because at last someone has worked out how to modernise good ol’ music.  Have we mentioned ‘Bad Time To Be An Outlaw‘ yet? Combine real outlaw country with production that contrasts soap with mud in a brand new format (previous release ‘South Broadway Athletic Club,’ although excellent, didn’t have this feel). This is Pac-Man country, hit & hope and it leaves the ballpark every time; those staccato riffs bounce against each other while the bass drum sings and you just know that when Brian Henneman says it then it must be a bad time to be an outlaw. The Rockets offer up that old style question and answer; they’re old school and yet brand new. And Clark’s ‘Analog Girl,’ who we thought could never die, is finally passing on the ghost to the worthy successors that are finally here, in the shape of ‘Bit Logic‘ by Bottle Rockets.

Nothing’s really changed and that’s the secret (whisper it softly). The romance, the groove, the bad guys, the stories, the raw lack of big hat Nashville? They just found a way of making the same old shit sound turbo-charged. Bottle Rockets really have answered one of the twenty-first centuries great mysteries and finally breathed new life into one of music’s greatest achievements.

A special mention to Eric Ambel and Mario Viele. We don’t necessarily big up production staff but this is a special case.

As for Bloodshot Records, that old Chicago record outfit deserves a word. It keeps coming back to AUK time and again with the best that the world of music has to offer. Keep it coming guys.