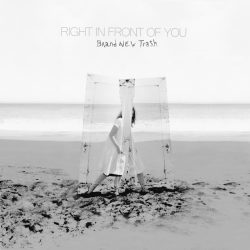 With their new album ‘Right in Front of You’ Brand New Trash have fashioned a career-defining statement. Over the course of 34 short minutes the record morphs from making out like it wants to be the centrepiece of the jukebox in The Double Deuce into something much, much more interesting, provocative and genuinely exciting than that. This record offers a powerful account of the joy these guys clearly get from making music while also managing to take us on a journey to experience again the desires, yearning, disappointments and memories of our precious heart and soul.

‘Right in Front of You’ is at once primitive and knowing. It is instinctual; coming from somewhere deep in the gut yet painstakingly crafted, paced perfectly and put together with an eye for detail that will give it some real longevity. In the vernacular of our younger, 1980s selves it hits the head, heart and feet – perhaps all that’s missing is the loins. The overriding power of the record though is its ability to provoke the spirit, to make us feel something, anything, in the way that all great rock n roll does.

One thing that marks it out is the ability to present feelings that are more nuanced and complex than the typical genre record. So we get regret & nostalgia coupled with a yearning almost bare ache throughout. What makes these feelings more powerful is that they are created by a perfect synchrony between the lyrics, playing and production. Everything works together to create a kind of existential emptiness and longing, emphasised by the up close and personal sound of the record, like you are in the room with them.

The opening one-two of the record suggests that we are in for something that is familiar and relatively easy to assimilate. The spindly Kings of Leon boogie riffs of the title track are followed by ‘That Dress’ with its teen flick bobby-soxer doo-wop by way of Mink Deville, like an outtake from the Grease soundtrack of a parallel universe. However, as the wistful acoustic picking and harmonica of third track ‘Back to that Place’ emerges into focus we realise that there is much more going on here though. Its evocation of youthful longing and lost optimism coupled with the grown-up resignation that inevitably follows it is delivered with a simple understated tune that really hits home. From this point the LP gets deeper, even weirder and darker towards the end and the effect is compulsive.

Across the 10 tracks here the songwriting Dewald brothers never shy away from their influences, rather playing around with them in crafting something genuinely compelling. It is clear that they are not consciously copying these influences but they are drinking from the same wellspring in a greedy way. So we get a carnival of songs reflecting some of Americana’s harder-edged mavericks (if that’s not a dirty word around here!).

‘Keep on Driving’ has the weather-beaten, talky downbeat feel of the wonderful Silos, almost like a demo they loved so much they had to include just as recorded. Then ‘Great Plains’ comes on like Chuck Prophet with fiddle by Steve Wickham in his pomp and ‘Coming Home’ becomes a mournful lament for lost love that could be a Kids in Philly outtake. The album closes with the dank almost funky My Morning Jacket blues of ‘Wouldn’t Change a Thing’. Indeed the influences at play are so impeccable that it is even possible to forgive the occasional errant ‘Pettyism’.

As recognisable as the band’s antecedents are they never consume their personality and we can be sure that what we have here is Brand New Trash in all their ragged glory. They have complied fully with their self-proclaimed philosophy of making music ‘without strings attached’ and given us a free-range record that takes stylistic leaps and bounds but always remains consistent and coherent, like your favourite mix-tape that never leaves the deck throughout the long journey. ‘Right in Front of You’ sounds like the culmination of all the work the members have put in with the various groups and collaborations since the Dewald’s (Vince and Jimmy) started the ball rolling in Indiana in the late 90s and then first worked with Ben Andrews in Buxter Hoot’n.

Hopefully the creation of such a cracking record will bond them to this project at the expense of their many other manifestations for the foreseeable. Having seen where the band has grown to over the course of three albums in 8 years we are eager to go with them on the next steps in their journey

Joyful and moving presentation of life's highs and lows