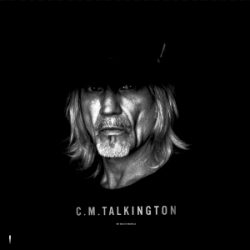 Where does Rock meet Americana? And where does Americana become just Country? Do any of these lines exist? Are they simply in the ear of the beholder (behearer?) This writer can’t really offer any answers to these big questions, but he can state his own opinion – that C. M. Talkington offers us up a record that’s leaning heavily towards rock, and only just squeezes into an Americana outfit.

Texas native, Talkington, is ostensibly known for his movie work, writing and directing the 1990s indie road flick ‘Love and a 45’. The movie flopped on release, greatly overshadowed as it was by Tarantino’s thematic limelight hogging. C.M. says making music has been his redemption, saving him from dark places and a wretched existence.

These songs were over ten years coming to fruition; brewing in his body, mind and soul.  So, to the record. It’s an easy take here that he’s not much of a singer; he’s half speaking throughout these big soundscapes. However, there are plenty of poor singers who are ‘great singers’ (Neil Young for instance). Though Talkington isn’t really one of them. There’s maybe a slight hint of Iggy Pop here and there in his voice, but no more than a slight hint. Musically, there are shades of the lowest common denominator stadium rock of U2 or maybe the worst aspects of the Stones. Opener ‘Watching the Blind’ has big, reverberating slide guitar and pulsating rhythm. But it isn’t much of a song really. Lyrically, Talkington isn’t terrible, but his spoken style lacks any great pathos. Second track ‘Not Exactly Nashville’ starts with a Dylanesque harmonica assault; it’s a more laid back song and probably the best of these eight tracks. ‘Gonna Rain’ is probably the poorest;  an amateur weather update, essentially. On ‘Don’t Be Late’ he doesn’t really try to sing, which one might think would be a good thing given his unprepossessing voice. Sadly, it isn’t. The whole package isn’t too much to get excited about.

Big, simplified Americana Rock. Heartfelt for sure, but with few charms.