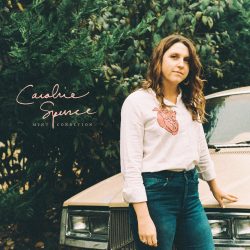 One of the most exciting “new” artists on the Americana scene, Caroline Spence has been making great music for some years now and ‘Mint Condition’ is her third album. It seems hard to believe she’s racking up her third release just as people are just starting to take real notice of her and the talent she brings to her writing and performing. This album may be her best yet; working with producer Dan Knobler and engineer Gary Paczosa who, between them, can boast impressive credits for the likes of Sarah Jarosz, Gillian Welch and Lake Street Dive among others, Spence has really crafted this album and it shows. Even though our original review copy was an unmastered version the quality just shines through, and subsequent updates with fully mastered tracks add the cherry to the icing. This is a very good album indeed.
Spence herself is in fine voice throughout but it’s the quality of her songwriting that really impresses. She, seemingly, effortlessly mixes upbeat rockers with more reflective tracks and manages to make every song count. Spence has clearly been honing her craft because the songs on this album sound like a real step up from previous work – and she set a good standard on her first two albums. Repeated listening to this new work reveals it to be a pretty much flawless set of eleven songs, ten of them written by Spence and the eleventh a co-write with fellow artist Ashley Ray. The co-write, ‘Song About a City’ finds Spence wishing she could write a song about a city rather than constantly writing about emotional entanglement – “I took two steps in Austin, one back in Boston, trying to learn something new. I found lonesome highways, brand new skyline but nothing could change my tune. Wish I could write a song about a city instead of songs about you.” Many artists look for co-writers to bring something extra to their own writing but, while ‘Song About a City’ is good, it’s clear from her own songs on this recording that Caroline Spence really doesn’t need any help when it comes to writing great tunes and equally good lyrics.

There are so many good songs on this album, from the quiet reflection of ‘Sometimes a Woman is an Island’ and ‘Angels or Los Angeles’ through to the anthemic ‘Long Haul’, a song that addresses the madness of life on the road and its effects on relationships – that causes her to write songs about failing relationships that she can sing at the next gig! There’s the jangling pop/rock of album opener ‘What You Don’t Know’ and the quirky stop/start rhythm of early favourite ‘Who’s Gonna Make My Mistakes’; nothing about this album is predictable and nothing sounds like filler.

And then there’s the title track, ‘Mint Condition’, with its particularly enjoyable back story. Apparently Spence, tired of writing break-up songs, decided to sit down and write a song that she could, one day, look back on with satisfaction and positivity – to quote, “something good enough for Emmylou Harris to sing.” She clearly succeeded because Emmylou herself guests on the song, their two voices blending beautifully. It closes out the album and it’s a pitch perfect decision to do so.

Caroline Spence is blessed with a great voice and great songwriting skills and she uses both talents to full effect on this recording. An early contender for album of the year.