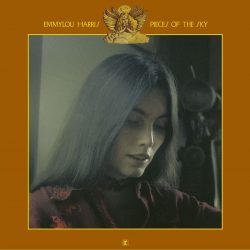 ‘Pieces of the Sky’ was an album eagerly anticipated by those of us who followed the road of Country Rock in the 70s. Still reeling from the loss of Gram Parsons, this was expected to be the next best thing to an album from the Cosmic Cowboy himself. It fully lived up to those expectations and then exceeded them, as Emmylou Harris stepped out of the shadow of Gram and established herself as not just a good harmony singer in a band, but as an artist with a very clear musical vision and the ability to front a band in her own right.

She’d released her first solo album late in 1969, the not particularly well-received ‘Gliding Bird’, on Jubilee Records, under the name of Emmy Lou Harris, but this was when she was still a relatively unknown folk singer working the Greenwich Village Folk Clubs.

‘Pieces of the Sky’ is her first album following the death of mentor Gram Parsons and is the album that came to define the Emmylou Harris we now know, marking her shift from folk singer to country-rock aficionado, and standard bearer for the cult of Gram, whether that’s what she wanted or not!

It was Chris Hillman, who had taken over the running of the Flying Burrito Brothers, following Gram Parsons departure, who first spotted Emmylou Harris’ potential, seeing her playing as part of a folk trio around the Washington DC area, and recommended her to Parsons, who was looking for a female singer to work with at the time. Parsons and Harris only worked together for a comparatively short period; Emmylou joined The Fallen Angels in 1971 and, by September of ’73, Parsons was gone, dead from an unfortunate cocktail of drugs and alcohol, but they’d already established a musical rapport and a collection of recordings together that would become legendary while determining the direction of Harris’ future career in music. In fact, Parsons last studio recording ‘Grievous Angel’, was to have been released under both their names, “Gram Parsons with Emmylou Harris” and featured both their faces on the album cover – but the album was released posthumously and Parsons’ widow, who had never been comfortable with the relationship between Parsons and Harris, had her name and photo removed. It changed little, while ‘Grievous Angel’ is credited as a Gram Parsons solo album, it’s clear that he viewed Harris’ contribution as significant and equal to his own.

In many ways, ‘Pieces of the Sky’ picks up where ‘Grievous Angel’ left off. Harris used several of the same musicians who had worked on ‘Grievous Angel’, including guitarists James Burton and Bernie Leadon, and fiddle and mandolin supremo Byron Berline, and she took the same eclectic approach to material selection, though more so since, at this point, she was still in a fairly fledgeling stage as a songwriter herself. So we see tracks from the Louvin Brothers (‘If I Could Only Win Your Love’) and Felice and Boudleaux Bryant (‘Sleepless Nights’) just as we had on ‘Grievous Angel’ (‘Cash On The Barrelhead’ and ‘Love Hurts’ respectively) but Harris also adds in more pop based material, such as The Beatles ‘For No One’ and Shel Silverstein’s kitchen-sink drama, ‘Queen of the Silver Dollar’ plus a nod to the established stars of country with Dolly Parton’s ‘Coat of Many Colours’ and Merle Haggard’s ‘The Bottle Let Me Down’, along with a couple from newer writers who would both go on to feature on other Emmylou Harris albums, Rodney Crowell (‘Bluebird Wine’) and Danny Flowers (‘Before Believing’).

The only original composition from Harris on this album is the achingly beautiful ‘Boulder to Birmingham’, which was co-written with professional songwriter, Bill Danoff. Danoff was a strange choice for a co-writer, given that he’s best known for ‘Afternoon Delight’, written for his then group Starland Vocal Band, and for writing songs for John Denver, most notably ‘Take Me Home, Country Roads’, but the combination definitely paid off, producing a mournful song that both celebrates and grieves for its subject, reflecting Harris’ own grief following Parsons’ death – “I would rock my soul in the bosom of Abraham/I would hold my life in his saving grace/I would walk all the way from Boulder to Birmingham/If I thought I could see, I could see your face”. It’s an intensely personal song and more than holds its own on an album packed with great songs from far more established writers. Rightly, it was recognised as one of the highlights of the album and has become a signature song for her. Though she’s gone on to write many more songs, this remains one that she’ll always be remembered for.

‘Pieces of the Sky’ was produced by Canadian musician and producer, Brian Ahern, specially assigned to the project by the executives at Harris’ record company. It was the first time they had worked together and marked the start of a very successful partnership which would go on to make a total of eleven albums, with Ahern becoming Mr Emmylou Harris in 1977, a marriage that lasted until 1984. Ahern was also responsible for bringing Rodney Crowell into the Harris circle, having signed him to a publishing deal not long before starting work on ‘Pieces of the Sky’. Crowell would be a member of Emmylou’s Hot Band for three years, joining in early 1975, and would contribute a number of songs to her records over the course of her career. All these factors come together to show what an important album it was and it’s no surprise that it regularly appears on lists of essential recordings, including Robert Dimery’s iconic “1001 Albums You Must Hear Before You Die”.

Significantly, Harris really put her own stamp on the various tracks she chose to cover. If her readings of ‘For No One’ and ‘Sleepless Nights’ were clearly reminiscent of the fractured, slightly ethereal quality she brought to her work with Parsons, ‘Bluebird Wine’ showed she could rock out with the best of them and then still deliver more classic country, as with the Haggard cover ‘The Bottle Let Me Down’. The whole album is a clear statement of intent from an artist who was now prepared to step into the spotlight and be judged on her own terms.

‘Pieces of the Sky’ would reach a very respectable seventh position on the Billboard Country Albums chart and give her a top ten country single with ‘If I Could Only Win Your Love’. While it was not as initially successful as some of her later albums, which would top the charts, it has gone on to receive two platinum discs for record sales, making it her most commercially successful solo album over the years. It’s an album that has never dated, sounding as fresh today as it did when it was first released and that eclectic selection of tracks has served her very well. Emmylou Harris has gone on to make over 40 albums, if you include all the collaborations and compilations, and many of them are outstanding – but ‘Pieces of the Sky’ is the album that set her on the start of her amazing career and it’ll always have a special place in my record collection.