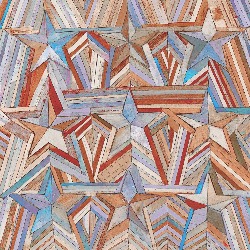 ‘The Faded Red and Blue’ is a five-track EP from Santa-Fe based songwriter,  David Berkeley. It was written in response to the political landscape in America: he began writing in the aftermath of the presidential election in November 2016 and completed the songs just after the shooting in Parkland, Florida in 2018. The EP is in part a comment on the topics that naturally stem from this time: gun violence, immigration, the world (as in the environment, but also humanity), however, Berkeley successfully steers away from being angry and ranty and instead leads us into a place of love and potential healing.

Title track ‘The Faded Red and Blue’ is a soft, acoustic piece. Berkeley sounds somewhere between Nick Drake and MG Boulter as he whispers his way through the lament to the fading of the American flag: “Have you seen the flag laid out, the faded red and blue, one star missing, edges torn.” Representative of the crumbling state of America’s union and Trump’s comments on immigration, he sings: “If we believe the promise in the fabric still holds true then we must be a harbour for the weak and weary too”.

Berkeley’s music is grounded in folk traditions with eloquent storytelling throughout all the tracks. Lyrically, he often feels conversational such as in the richly layered ‘Throw down a line’ where soaring violins are juxtaposed with his stream of consciousness as he hears about the Parkland shooting: “Just before the dawn, half a world asleep, I heard the news, heard the news man weep”. The song ends with an uplifting call to action: “Let’s throw down a line and hold on to the end,  I know it’s time, time to start again”.

The EP ends with a stand-out track in ‘This Be Dear to Me’. It’s probably one of the simplest songs both musically and vocally. Berkeley sounds very like Damian Rice here and he’s beautifully backed up by Anna Tivel who adds depth to the piece without being overwhelming. Lyrically, it is almost prayer-like as he lists all the things that are dear to him. From the simplest of holding hands to the beauty of the seasons he then asks from help from God: “Oh I believe this is what’s worth fighting for / Oh help us see that there is so much more, Adonai.”  The song ends up being like a warm hug with the message: “Feel the love surrounding you, this be dear to me…Yes you are dear to me”.

While the subject matter is often political and sometimes devastating, the songs on this EP are delicate and filled with love. Berkeley has used his music to try and appeal to our common humanity and a hope that it still exists, somewhere.

A warm hug of an EP that reminds us that while the world is in conflict, music can help.