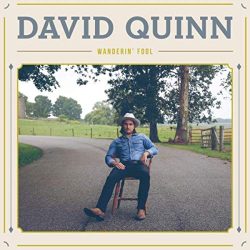 “Chicago cosmic country!” thus David Quinn is introduced via the gimmick weary world of the media press release. The resulting introduction into the life of this travelling proponent of country rock tells a different story. From the northern woods of Wisconsin to the California pop-rock scene, right up to the Rocky Mountains of Colorado and on down to Texas on what he calls his “quarter-life crisis”, there’s more to the man than the label.

Debut ‘Wanderin’ Fool’ sees Quinn working with producer Andrija Tokic (Alabama Shakes, Hurray For The Riff Raff) with a backing band that includes David Roe (Johnny Cash) and Jimmy Lester (Hayes Carll). A stellar cast but what of the man himself? Well, he’s shared the stage with Sam Morrow, Josh Card and the Giving Tree Band, so not a half bad résumé.

While delving into ‘Wanderin’ Fool’ is by no means tiresome – indeed it’s difficult to pin down anything particularly wrong with it – at the same time tracks like ‘Grassy Trails’ are not overly inspiring. Which is surprising considering the amount of inspiration that has obviously led to this point. The title track gets as close to “cosmic” as anything else with its Gram Parsons-esque soaring guitar.

The lyrical path never strays too far from the country cliché which is so formulaic during single ‘Three Quarter Time’. It’s a comfortable space occupied by lines such as “A nickel or a dime/When you’re drunk on blackberry wine”. Images of a stately old-time waltz around a hard-up Texas honkytonk dance floor spring to mind. Elsewhere, ‘Wanderin’ Fool’ climaxes with a step away from this and coincidentally, the highlight of the album. ‘Where The Buffalo Roam’ is a tribute to Quinn’s Colorado days, the upbeat change of formula is a fantastic closer and in Quinn’s words “it’s the step-child of the record. It doesn’t fully fit”. An interesting final thought perhaps.

It's country, but is it cosmic?