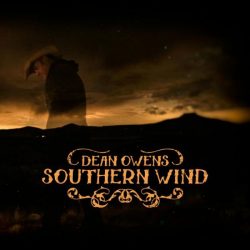 Dean Owens is a well known artist from Leith, with an established reputation on both sides of the Atlantic and here is a very special album. This review should convince you to take special notice of  his work. Recorded and produced in Nashville, with an array of notable musicians in support, you can “feel the wind blowing” through the music. On the title track, and throughout the album, you can hear Will Kimbrough and his all-round musicianship. He is a close associate and friend of Dean’s.

Starting, then with ‘Southern Wind’, and remembering Eric Golding’s words in “Lyrics of the Troubadours,” where the lyrics, in such a context, depend for their coherence and effect on the live relation between the singer and his/her audience, this precisely, is where Dean succeeds so strongly in his work generally, and in this album so particularly. In this song, and throughout the album, the lyrics are precise, in short phrases, with a singer in full control and fully supported here by Kimbrough on slide guitar and the voice of Kira Small. Watch out for that voice on the the memorable and uplifting spiritual ‘No Way Around It’ and be amazed by the the full arrangement there.

Some of Owen’s songs make moving, fleeting references to family life, with easy, perfect rhymes. ‘Elvis was My Brother’ is a simple but unforgettable, up-tempo tale of growing up, influenced by Elvis’ songs. A hard life, yes, “But somewhere in those old songs/ I found a place where I belonged.” In all of Owen’s work, through his voice and storytelling, he manages to get beneath emotions into deeper understanding. On the same lines are two other songs: ‘Mother’, which he wrote with a little help from Danny (Champ) while he was touring with them in the UK, and ‘Madeira Street’, written in memory of his late sister, a gulpingly tender and remarkable summation of a deep deep feeling.

Should the album catch you, and so it should, keep on coming back to a track, like, say, ‘Love Prevails’, and let it work its way around your own feelings. One should come back regularly to this album, any personally particular track, and just wallow in Owens’ work. Here is a singer going places. Also, consider Dean’s background as a boxer, and listen to ‘The Louisville Lip’, noting Danny Mitchell’s haunting trumpet and noting the words: “I sat with my father/Watching the Foreman Fight…/ What’s he playing at?”  That important family detail again. An important point, also, in the context of the whole album is the producer, Nelson Hubbard who works in Nashville. Look him up and check over the work he is planning with Dean in the near future. This will confirm how much our man from Leith has yet to offer.

Interesting and fascinating, a singer who has his own voice.