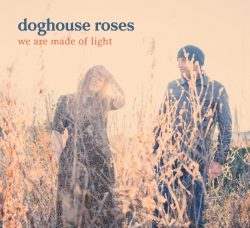 Having toured on and off for 18 months since the release of their 3rd album ‘Lost is Not Losing’, Doghouse Roses have paused long enough to release ‘We Are Made of Light’, a mix of new material and songs that have been written during the 15 years that Iona Macdonald and Paul Tasker have been together, but have never previously recorded. With Macdonald’s distinctive vocal tone, often drawing comparison with the likes of Sandy Denny and Linda Thompson, and Tasker’s skilful guitar and banjo playing, ‘We Are Made of Light’ – recorded in Glasgow, but mixed in Slovenia – is an album of varying themes and styles.

There are songs of love and all its exciting adventures, of betrayal, broken hearts and the like, but also of social issues, such as people displacement, climate change, and the rise of populism. Clearly these topics have been close to their hearts throughout their career. There is also a track about the awful helicopter crash off the coast of Aberdeenshire in 2009 which saw the tragic loss of many lives.

A minor problem with this album is that it feels like the material not recorded for the past 15 years probably wasn’t for good reason and yet has now found its way onto the record among the new material. This patchiness in quality takes a little of the sheen off what might have been.

This is not to say there is no good stuff to listen to; the banjo led cover of Peter Green’s/Fleetwood Mac’s ‘Oh Well’ is a joy (although not enough of it), as is its conjoined track ‘The Fermi Paradox’. ‘Arsenic’, with its undertones of Natalie Marchant, is a bold commentary on the state of our climate problems and ‘Rise and Fall’ has a delightful dripping piano and light slide guitar which complement superbly.

This is a decent album, with some respectable songs, competently sung and played. The use of strings, courtesy of the Pumpkinfield Trio, is excellent, subject matter is on-trend and intelligent and overall there is a positive look out into the future. It’s just the lack of consistent quality that stops it being more than a decent album.