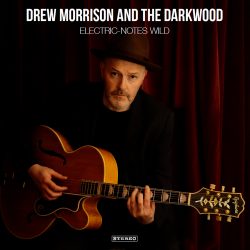 Electric-Notes Wild is the debut album by Drew Morrison and The Darkwood. The Scottish songwriter and his combo have been the house band at Country Soul Sessions in London’s Soho for over 5 years, performing with acts such as Rotifer, Paul McClure and The Local Heroes, Matthew Edwards and The Unfortunates, Morton Valence, Bob Collum and The Welfare Mothers, Lynette Morgan and The Blackwater Valley Boys and many others.

Recorded at Reservoir and Project-a-Sonic studios with guest musicians Tim Pearson (of the East Lonesome Drifters) and Henry Senior (Danny and the Champions of the World) Electric-Notes Wild is released on the band’s own Storm Cloud Agency Records. The album starts with ‘Always’, a personal tribute to Johnny Cash with Morrison proclaiming “Your song played on the radio, you were bug when I was a kid…. I’ll carry you always”. This track showcases some tasteful guitar and piano that would sit comfortably in one of the Man in Black’s tunes.

Some angsty personal sharing in ‘Keep Moving On‘ – “I realise that cheating came easy to you…. I’ll keep moving on ‘cause you’re bringing me down“. Once again some nice, Dwaine Eddy inspired guitar work here making this a pleasant listen.

Next up is ‘Ladytime‘ where we are treated to some genteel organ and Morrison tells a story of a doomed love affair with an ex-partner seemingly lost in a lacklustre material world, “In your structured world flowers must be plastic.” There are some enjoyable harmonious chord progressions on this song, along with another charming solo which suits the tune well.

Some nice grooves in ‘Islands,’ which precedes the enjoyable ‘Like We Used To Do,’ where Morrison is longing for the enjoyable goods times of a relationship – “Let’s make love like we used to“.

A raucous bluesy guitar solo kicks off ‘Let Me Break Your Heart Tonight,’ which is a stand out track. The bar room sound is continuous throughout this record along with personal heartfelt optimistic lyrics despite the obviously painful place from which they were written. No more so than on ‘In Your Own Time‘: “Things will work out better – you’ll come back in your own time“. A traditional and soulful offering.

Drew Morrison bears his soul on this record and it’s heartening to hear such honest vulnerability throughout. If you’re looking for a ‘go-to break-up record’ this may help you through some dark times.