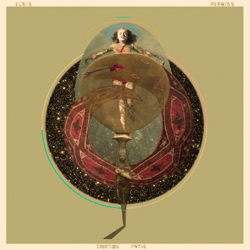 Full disclosure. This reviewer was quite enamoured of Elvis Perkins’ first two albums, ‘Ash Wednesday’ and the more emphatic ‘Elvis Perkins In Dearland’, at the tail end of the aughties, finding him to be a literate and sensitive purveyor of well written and delicately performed modern folk songs, not too far removed from the likes of Eef Barzelay. He fell off the radar somewhat afterwards, working with his brother, Osgood, on soundtracks, and ‘Creation Myths’ is his first fully fledged recording in some time. In a somewhat contradictory fashion, the album consists of songs composed around the time of his first album but here recorded in a lush, and at times intoxicating, blend of cosmic country and sixties pyschedelic pop.

While his light tenor voice still recalls that of Barzalay’s, Perkins sings these songs with a light footed touch, dancing daintily over some excellent arrangements including a well oiled horn section which on occasion (‘Promo’) has a decidedly New Orleans touch of joi de vivre. Also prominent is the pedal steel of producer Sam Cohen which glides wonderfully on several of the songs here especially on the translucent ‘Know You Know’, a song suffused with Lennon like wistfulness. On ‘Iris’, Perkins takes a deep breath and dives into a porpoise filled underwater Monkees’ adventure which is quite astounding in its immersion in retro pyschedelica.

It’s apparent from the opening ‘Sing Sing’ that Perkins has clothed these old songs in shimmering garments. It’s another pearlescent dive into submarine territory with his voice multitracked as myriad keyboards and strings swathe the song. ‘See Monkey’ has a fascinating tug of war with syncopation as it sways between carnival like interludes and an insistent piano figure trying to tie it to the ground. However, Perkins is just as good when he becomes somewhat forlorn. ‘The Half Life’ limps into saloon bar territory in a solipsistic manner with the band just perfection as they sway and saunter while the closing song, ‘Anonymous’, finds Perkins in a most melancholy mood with weeping strings and dramatic flourishes as he delves into a European sense of chanson.

‘Creation Myths’ is a tremendous album allowing Perkins to return to centre stage. He has a long strange journey behind him, some of which is touched on when he spoke to AUK recently. It’s not an album to set the foot a tapping but it’s an incredibly engaging listen.

An excellent album from yet another Elvis