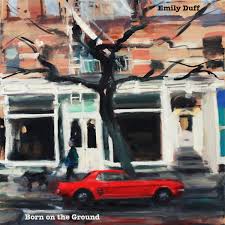 Emily Duff’s ‘Born On The Ground’ is a breakup album, a collection of nine songs capturing nine different relationship break-ups from her past. In her own words it is a “luxurious, 20/20 hindsight look back, without anger, for 2020.” Exuding a confidence that comes with experience, Duff has infused these tracks with a hard edge, softened by the country soul vocal that is evident throughout.

The title track is as good a place as any to highlight the best aspects of the album. A steady tempo, great guitar work and Duff’s vocals here hinting at Bonnie Raitt. If there is such a thing as twinned songs on an album then here we are led to ‘Killer’. It has a very similar rhythm and feel to it and stands alongside the title track in finding Duff at her more mellow and radio-friendly.

The promo for the album screams “City Punk meets Country Soul” and, if the two aforementioned tracks would struggle to live up to those claims, then there are other, more obvious nods to this hyperbole. Take the fast and furious ‘Knuckle Sandwich’ with the opening lines ‘How’d you like a knuckle sandwich, how ‘bout my fist down your throat.’ Two and a half minutes of what sounds like a considerable and unambiguous cathartic release of pent up angst.

That knuckle sandwich is dressed up in various guises at other times. ‘No Escape’ uses a honky-tonk piano track as a central accompaniment to wrap around the chorus ‘I would climb the highest mountain, swim an ocean full of tears, I would do most anything, if you would only, disappear.’ Cliched and unoriginal lyrics transformed by those last few words into the triumph of a good old-fashioned country-style punch to the gut.

Duff is at pains to point out that the nine breakups played out on the album are not confined to the traditional lovers break up. Hers is a much broader interpretation that includes breakups with family members, friends or careers as well as simply sometimes just the breaking of bad habits and, maybe, the differing twists and turns that the music takes on the album reflects those differences.

‘Born On The Ground’ was, in the main, recorded live in NYC and one wonders, if all country music came out of that melting pot, whether the genre may have headed in a more interesting and nuanced direction. Whatever, Emily Duff is evidence that the genre still has plenty to offer when entrusted to the right artist.

Country soul from the city