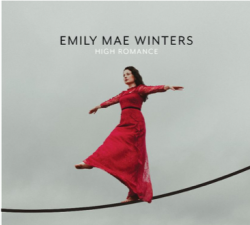 Emily Mae cites amongst her influences Gillian Welch, Emmylou Harris and Alison Krauss and there are touches of Linda Ronstadt and Brandi Carlile in there too, but Winters is her own woman and her voice has a uniqueness that transcends all those comparisons. It has great depth and strength and there’s even a touch of “old” country with a tear-jerking break in it on certain songs. She and Ingram obviously have great confidence in her voice as there’s no double-tracking at all and very few backing vocals either, so her voice shines through. Ingram (whose production credits include Liane La Havas and Laura Marling) has done a superb job and allowed, not only the vocals but the instrumentation, room to breathe and be heard clearly and distinctly. Ably backed by Ben Walker on guitars, John Parker on bass and Ingram himself on drums, percussion and piano, the album, recorded in Ingram’s Urchin Studios in Hackney, has the sound and essence of East Nashville rather than East London.

The album opens with a song based on a romantic, traditional Irish poem by Samuel Lover (how apt) called ‘Come Live in My Heart And Pay No Rent’ a superb sentiment that Winters delivers with a touch of the Irish in her voice which is no surprise as although she was born in Birmingham, she was raised in Clonakility, County Cork.

The other ten songs are all superb with a consistency that means whilst there isn’t a song that really stands out, there isn’t any filler either. They’re mainly love songs – well the album is called ‘High Romance’ – but they incorporate songs about living with modern technology, being on the road and following your dreams. If there’s one tiny criticism it is that the album ends on a down beat note with two ballads, ‘Across The Wire’ and ‘One Of These Days’ rather than one of the earlier foot-stompers such as ‘Closer’ or ‘Gin Tingles & Whiskey Shivers’ but with modern technology everyone can be their own track sequencer and have the songs in any order they want so that’s not really a problem – unless of course you have it on vinyl and then there’s not much you can do!

Emily Mae Winters is a force to be reckoned with and hopefully there’s a big future for her. Her deep, throaty voice bestrides the bridge between country and folk and sends a tingle down the spine of the listener. The second album is often referred to as the “difficult” one, but this doesn’t seem to have worried Winters and she has avoided the dreaded “sophomore slump” with a wonderful album to file under folk, country and of course, Americana.