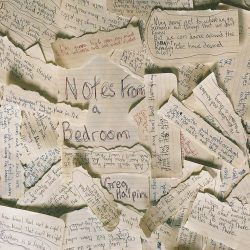 The debut solo album from Montreal-based Greg Halpin delivers exactly what its title suggests: slice of life observational songs recorded in a makeshift bedroom studio. The 13 tracks are arranged almost exclusively for acoustic guitar, alternating between heart-felt strumming and lively finger-picking. This instrumental austerity does get tedious at times. The odd harmonica or whistling solos aren’t enough to keep listeners engaged all the way through the longer compositions.

That being said, Halpin puts wit by the fistful into his lyrics. At times poignant, genuinely funny, or downright satirical (as in rapid-fire, stream of Facebook consciousness ‘There’s Gotta Be More Than This’), they show his keen eye for truth and often redeem sparse arrangements.

The production is decidedly lo-fi, recorded on music cassettes with a tell-tale analogue hiss. While this aesthetic works well on sentimental ‘Let It Grow’, most of the time it’s hard to shake off the impression that it’s a demo tape and not finished work. Somewhat muffled guitar tone and, with louder vocal parts, unpleasant room ambience are more distracting than atmospheric.

That’s a big shame too, as emotion on the album cuts the deepest when Halpin’s signing bursts into a raspy, almost desperate shout (as on ‘Lonely AF’). Its authenticity is truly touching, and deserves to be captured in a better space.

Despite its technical faults and instrumentation that’s austere to excess, Notes from a Bedroom is a promising debut, and Greg Halpin a songwriter to look out for.